Watch An Infant Hear His Parents' Voices For The First Time 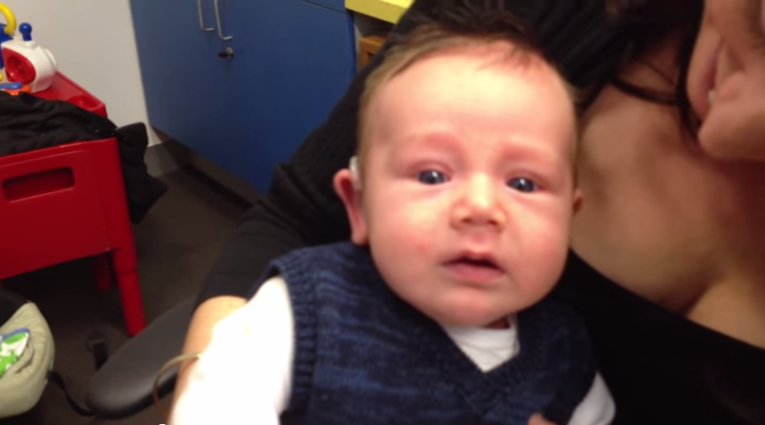 The little boy in this video, Lachlan, was diagnosed with moderate to severe hearing loss in both ears; however, we are no longer bounded by physical limitations in the way that our ancestors once were. Thanks to science, we are able to correct (indeed, to eliminate) many aliments.

Typically, sound waves are mechanical waves. In other words, they are an oscillation (vibration) of matter that transfers energy through a medium. When sound is produced, it is because something is vibrating (like a vocal cord), and this something hits the air next to it in a particular way, which causes all the other air particles to bump together in a particular way, and—Presto!—you have sound.

In order to restore his hearing, Lachlan was fitted with a digital hearing aid that contains a silicon chip. This device is made of millions upon millions of tiny electrical components that are continuously processing sound. The hearing aid takes these sounds (vibrations), converts the received signals so that they are clearer and more audible, and then feeds these into the ear. The processor is also able to distinguish background noise from other sounds and filter out these "unimportant" noises (like traffic, for example). In this respect, the device not only amplifies sound, it also helps the listener distinguish various sounds more effectively.

WATCH: Infant Reacts to Hearing Sound for the First Time

As an added bonus, watch this video of a woman hearing for the first time. Truly amazing...

Read next: NASA Records the Sounds of Space