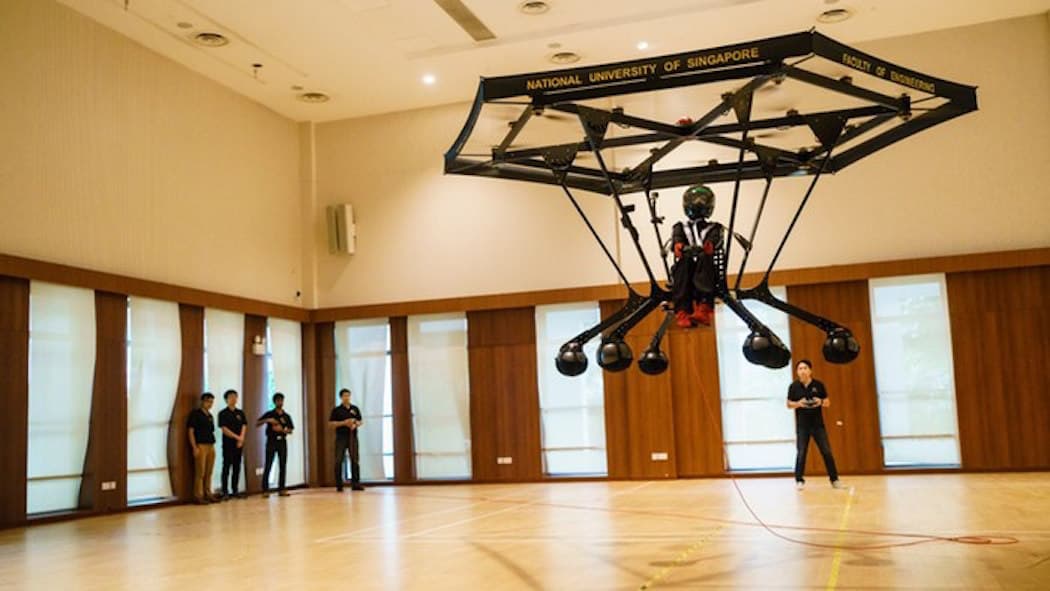 A team of eight students form the University of Singapore have created a battery electric multicopter designed for recreational flying.

Called "The Snowstorm," the machine is capable of carrying a human pilot, allows vertical take-off and landing, and also allows individuals to adjust pitch, roll, and yaw...on top offering a number of automated flight modes. For additional safety measures, the multicopter can also be controlled from the ground with operators having the ability to end the flight and land the device safely in case of emergency.

The Snowstorm is mounted to a hexagonal anodized aluminum frame with 24 electric motors, each driving a 76 centimeter prop on carbon fiber plates and tubes attached to Kevlar ropes.

It runs on three lithium batteries that are capable of running independently, allowing for five minutes of flight each with a 24 kg (155 pound) pilot aboard. Pilots are secured with a harness onto the multicopter, which features six landing gear legs with an inflatable ball to break the landing.

"NUS' Snowstorm shows that a personal flying machine is a very real possibility, primarily as a means to fulfill our dreams of flying within a recreational setting," said Dr Joerg Weigl, one of two supervisors of the project.

The team behind the project is now continuing the development of the multicopter in the hopes of bringing the project to commercial production, which also offers multiple applications for commercial use and for emergency response as well.

Read This Next
Futurism
Watch The UFO-Like, 18 Rotor Volocopter Take its First Manned Flight
More on Robots & Machines
Dogs With Guns
Yesterday on the byte
China Shows Off Drone That Drops Robodog With Huge Gun Anywhere
Roboforce
Tuesday on the byte
CEO Brags That Fry Cook Robot Will Replace Obsolete Human Grunts
Quacks Like a Duck
Tuesday on futurism
Watching Elon Musk's Robot Back to Back With Boston Dynamics Is... Something
READ MORE STORIES ABOUT / Robots & Machines
Keep up.
Subscribe to our daily newsletter to keep in touch with the subjects shaping our future.
+Social+Newsletter
TopicsAbout UsContact Us
Copyright ©, Camden Media Inc All Rights Reserved. See our User Agreement, Privacy Policy and Data Use Policy. The material on this site may not be reproduced, distributed, transmitted, cached or otherwise used, except with prior written permission of Futurism. Articles may contain affiliate links which enable us to share in the revenue of any purchases made.
Fonts by Typekit and Monotype.