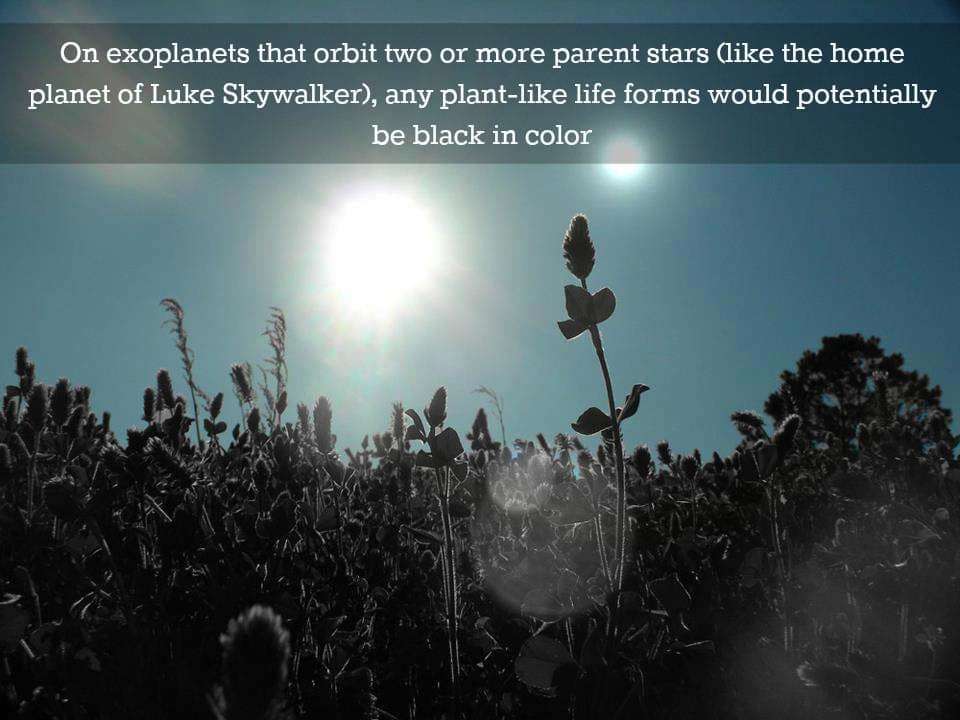 All of you sci-fi fans that have seen the Star Wars trilogy, I'm here to ruin your life, or make it (depending on how big of a nerd you truly are). You've been lied to. As we've discussed previously, Tatooine (the planet in a galaxy far, far away that Luke Skywalker hails from) actually exists out there somewhere. In fact, Tatooine-like planets (or exoplanets circling two or more stars) are quite likely a dime-a-dozen (especially considering most of the stars in our galaxy exist in multiple star systems). Still, if you thought you have the Star Wars mythology down pat, think again! According to a 2011 study authored by Jack O'Malley-James, of the University of St. Andrews in Scotland, one thing Tatooine is missing is black trees!

Here on Earth, our plants derive energy by converting starlight into energy through a process called photosynthesis. Photosynthesis uses light to produce sugar, which, gives us breathable oxygen (after which, the carbon dioxide we exhale is used by plants again). As you know, our plants are green. But have you ever wondered why that is exactly? Well first, plants contain green pigment called chlorophyll, which plays a key role in the photosynthesis process. Specifically, chlorophyll is more effective at absorbing starlight in the blue portion of the electromagnetic spectrum (this portion carries the most energy, but is of lesser quantities) and in the red part (this is less energetic, but far more abundant). Now, chlorophyll reflects starlight at the green part of the spectrum, thus supplying plants with their green coloring. However, this may be very different on other rocky planets scattered throughout the cosmos.

In addition to the number of photons emitted and their energies, the color of the light also plays a large role in the color of our plants. Stars are all sorts of colors (besides green) based on their temperature and mass (to some degree). So depending upon the distribution of wavelengths from the starlight that a particular star emits, plants on an exoplanet could evolve in a much different manner than the plants here on Earth do.

While red-dwarf stars (Krypton, anyone?!) may be the most prevalent type of star throughout the universe, most scientists don't think they are viable stars to host 'life as we know it', but on the off-chance that life did find a footing, any plant-life would be faced with several issues. For starters, stars of this type are very dim and they emit most of their energy in infrared. The photosynthesis process would be even more complicated if the exoplanet was tidally locked to its parent star (where one side is basked in perpetual daytime and the opposite side stuck in perpetual nightfall). Of course, this is problematic for approximately half the planet. However, any existing plants on the star-facing-side would likely appear black in visible light because they would need to absorb the entire spectrum of visible light, which would allow them to fully utilize all of the energy emitted from their dim star.

"They may also be able to use infrared or ultraviolet radiation to drive photosynthesis. For planets orbiting two stars like our own, harmful radiation from intense stellar flares could lead to plants that develop their own UV-blocking sun-screens, or photosynthesising microorganisms that can move in response to a sudden flare"

Of course, we can continue to speculate on the color alien plants would be until the cows come home, but at this moment, no conclusive evidence has come to light to suggest that there is any sort of life on any other planet apart from our own. But still, photosynthesis is responsible for the massive amount of oxygen in our atmosphere and ozone layer alike. The same could be true for other distant exoplanets. This knowledge gives us a a starting point in the search for Earth 2.0. Until that day comes where we can accurately determine each and every variable that could impact photosynthesis, our computer simulations will have to do.