This Mechanical Hand Was Created by a Nine-Year-Old 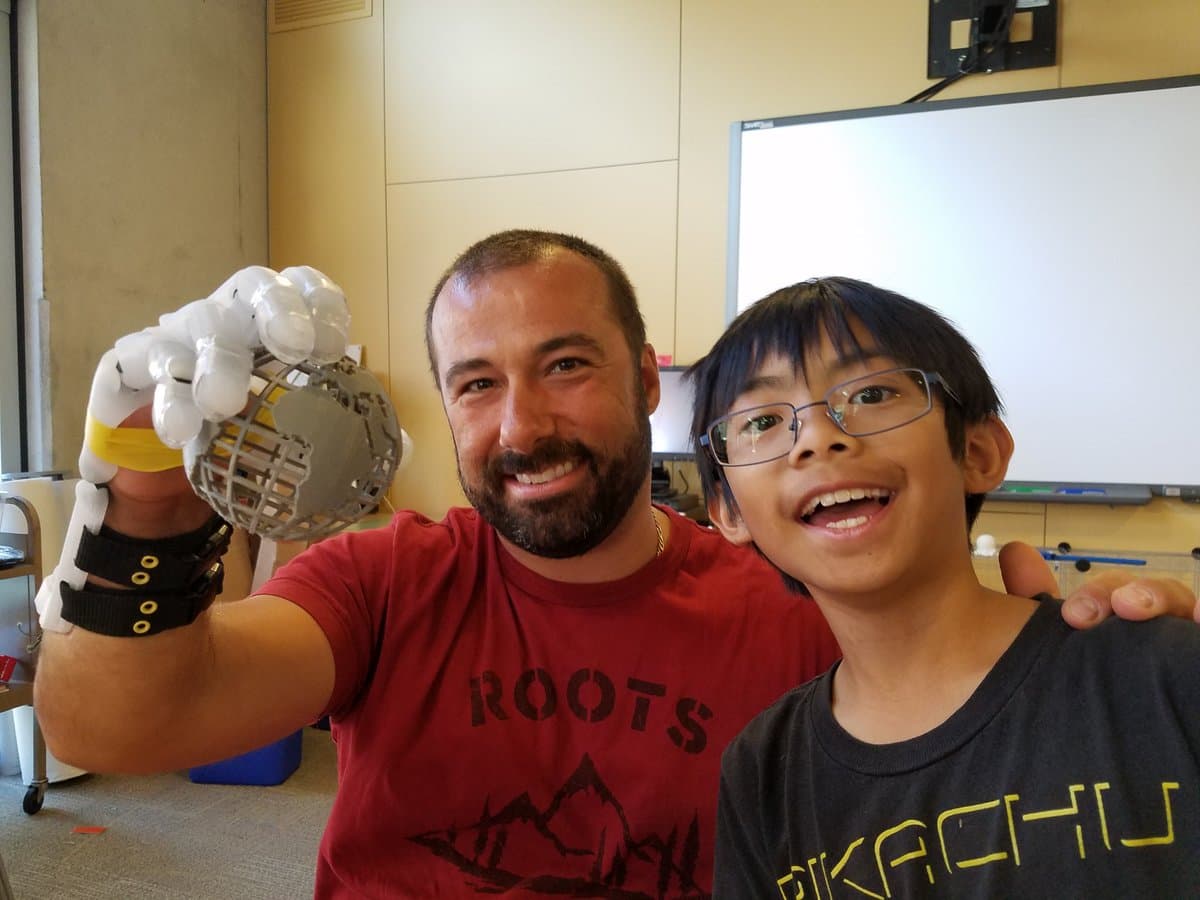 Some boys love sports, others love fishing, and others love tinkering with 3D printers in order to make a bionic hand for their teachers. Yep, they just...wait, what?

Calramon Mabalot, a kid from San Diego, is a nine-year old who just loves to “craft things with 3D printed parts” with his older brother, Calexis. Pretty wild, right? But that's not all.

Just recently, he was able to build a mechanical hand for a local high school teacher he met while modelling other 3D projects he was currently working on at that time. For the project, he used the downloadable open-source code of a community called Enabling The Future, which aims to “Give The World A Helping Hand” (pun intended?).

Now, with his brand new hand, Nick is able to write and draw on a piece of paper. You have to forgive the awful drawing though, he's just getting used to it. Sorry Nick!

3D Printing His Way Out of a Disability

When asked what his inspiration was for starting this wonderful hobby of his, he'd say that the Walt Disney Movie "Big Hero 6" played a big part in it. If Hiro Hamada, a young genius in the movie, could do things like this, well, why can't he?

As a matter of fact, according to TechCrunch, when asked where his interest in building a 3D-printed arm came from, the response came in as: “I like learning it.” That's it, he just downright loves doing it. Take a look at the video below to see his energizing enthusiasm towards his work.

It's hard to believe, but it is also really re-assuring to see young children accomplishing such big things early in their lives. With the right amount of passion and eagerness to learn, the sky's the limit for this kid.

Read This Next
Futurism
This 3D-Printed Human Heart Can Do Everything a Real One Can
Futurism
Get Ready for Drug-Delivering Tattoos and Bones That Can Harvest Energy
Futurism
Revolutionary Bioprinting Tech Results in Beating Heart Cells
Futurism
Organs on Demand: Bioprinting Will Be the Answer to Donor Shortages
Futurism
Welcome to a World That Prints Prosthetic Limbs
More on Enhanced Humans
So Sue Me
Wednesday on futurism
Battle Erupts Over Alleged Grisly Photos of Brain-Hacked Neuralink Monkeys
Synchron Eyes
Aug 23 on the byte
Frustrated With Neuralink's Slow Progress, Elon Musk Approaches Competitor
Futurism
Aug 4 on the byte
Air Force Pilots to Fight AI-Based Enemies Using AR Helmets
READ MORE STORIES ABOUT / Enhanced Humans
Keep up.
Subscribe to our daily newsletter to keep in touch with the subjects shaping our future.
+Social+Newsletter
TopicsAbout UsContact Us
Copyright ©, Camden Media Inc All Rights Reserved. See our User Agreement, Privacy Policy and Data Use Policy. The material on this site may not be reproduced, distributed, transmitted, cached or otherwise used, except with prior written permission of Futurism. Articles may contain affiliate links which enable us to share in the revenue of any purchases made.
Fonts by Typekit and Monotype.