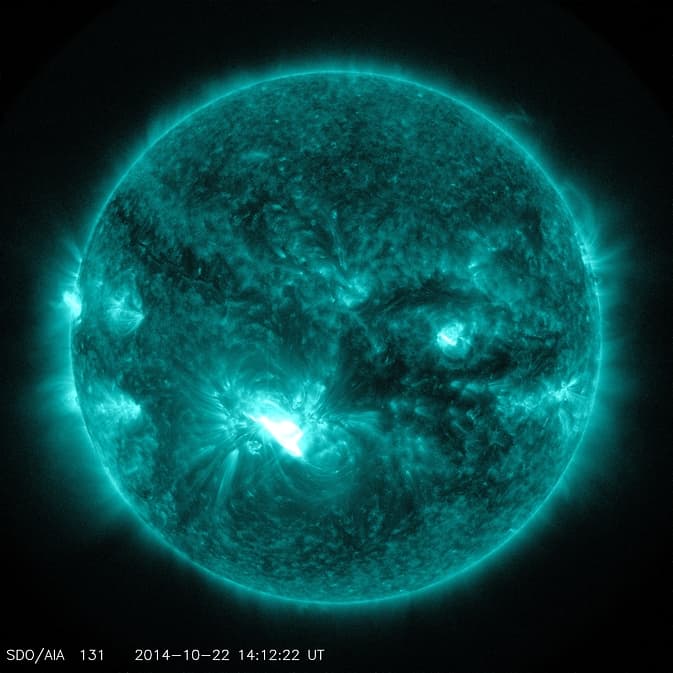 Our sun, that great fireball in the sky, is the giver of light to all the Earth. However, at times, we can feel very disconnected from our nearest star, not so much because of its physical distance (which is some 93 million miles/ 150 million km), but because we take it for granted. From Earth, we just see a bright ball of light that travels throughout the sky, much the same, day after day. The problem is that we don’t really see what is going on, and so we forget about the immense power the Sun. But every now and then (rather frequently, actually), it flares up to remind us of its power.

The Sun erupted with another significant flare today, peaking at 10:28 a.m. EDT on Oct. 22, 2014. NASA’s Solar Dynamics Observatory captured images of the event, which occurred in the lower half of the sun. This flare is classified as an X1.6 class flare. X-class flares denote the most extreme flares. This is the third substantial flare from the same region of the sun since Oct. 19.

Solar storms generally occur as a result of variations in the Sun’s magnetic field lines. When these field lines fluctuate, the matter they contain is released out into the solar system (and by “released,” I mean that it explodes from the Sun in a hellish firestorm). These super-heated particles blast from the Sun at speeds exceeding 600 miles per second (1,000 kms), and they can contain over 200 billion pounds of material (100 billion kilograms).

Although X-class flares are the most extreme class of solar flares, there is nothing to be concerned about. Space is amazingly big, and the distance between the Earth and the Sun is quite vast. As such, much of the material sprays off in other directions, and the high energy particles largely dissipate by the time that they reach our planet. As NASA notes,

Further analysis will be conducted to determine if there is a CME associated with this event as imagery comes in. This region has produced 7 M-class (R1/R2 - Minor/Moderate) flares in the past 48 hours as well as an X1 flare on October 19th. So far none of the CMEs associated with these events are expected to be geoeffective, however, forecasters will keep an eye out for both CME activity and solar radiation storm possibility as the region approaches center disk.

READ NEXT: Coronal Mass Ejection-The Storm of the Century