The Tenents of Semi-classical Gravity 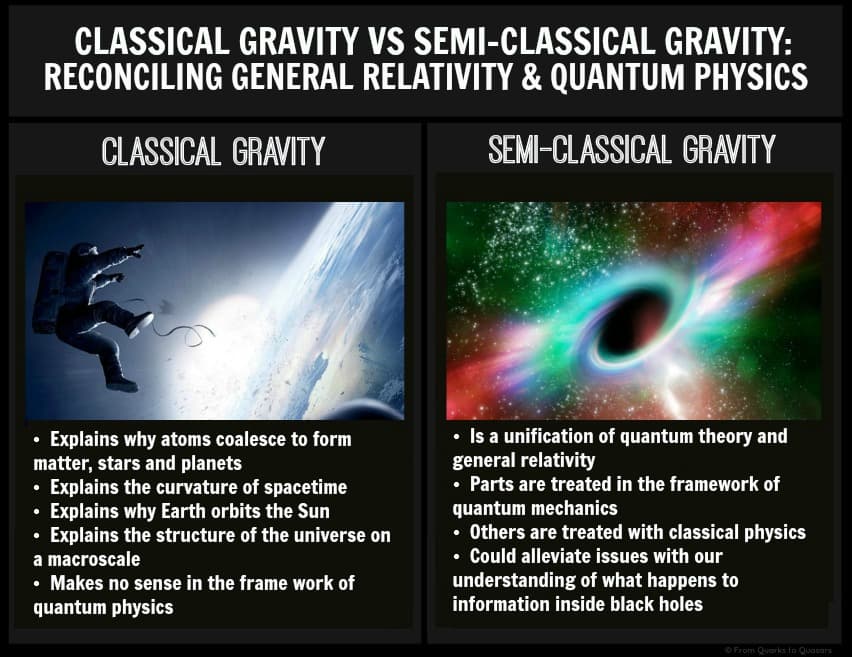 There are a number of hypotheses running around trying to reconcile general relativity and quantum mechanics. Some ideas have more credence than others, but across the board, there isn’t enough falsifiable testing one can perform on these hypotheses to separate fact from clever ideas. One such theory is approaching testability, the theory of semi-classical gravity. This, of course, is very exciting for theoretical physicists across the board.

Semiclassical gravity is a spinoff of quantum gravity (another hypothesis trying to achieve unification). Here, the concepts found in macrocosm and the microcosm are combined, dismantling the stern classical view of reality and creating a semiclassical viewpoint. More specifically, as described by Lisa Zyga: “matter obeys the rules of quantum mechanics while gravity and the spacetime structure obey classical laws.”[1] Now, as with all of the theories attempting to unify the forces of nature, the issue is, “how do we test it?” In a recent study, physicists attempted to answer this very question as it relates to semiclassical gravity could very well be detectable in experiments using modern equipment.

There are basically two ways you can look at gravity at the quantum level, gravity can either be quantized or it cannot be quantized, as was postulated by Richard Feynman when he said,

“Quantum theory does not absolutely guarantee that gravity has to be quantized. ... I would like to suggest that it is possible that quantum mechanics fails at large distances and for larger objects.”

Huan Yang, from the California Institute of Technology, and one of the coauthors of “Macroscopic Quantum Mechanics in a Classical Spacetime” says:

“Semiclassical gravity is one of the existing models which tries to unify quantum mechanics and general relativity. Instead of trying to quantize space and time (as in string theory, loop quantum gravity, etc.), in this model the spacetime is assumed to be a classical entity, although the matter particles in the spacetime are quantum. Our findings show the imminent possibility of verifying or falsifying the semiclassical gravity experimentally.

More importantly, we point out that both self-gravitational effects and quantum effects are important for macroscopic objects—the only regime accessible by table-top experiments so far. This opens up the possibility for testing other models that try to unify quantum mechanics and general relativity, as well: gravity decoherence models, stochastic gravity models, emergent gravity models, etc. We don't necessarily believe any of these models, but we believe it is important to test signatures/predictions of these models experimentally and let nature tell us what the true physics is, as we don't have a conclusive theory of quantum gravity yet.”

HOW WE CAN TEST IT:

To test this, scientists probe the center of mass of crystals using the Schrodinger-Newton (SN) equation. The SN equation is a non-relativistic equation describing how quantum states change over time as influenced by classical gravity. The equation is usually used to describe single particles, Yang and his partners in crime discovered the equation is valid for describing the formation of crystals. Particularly, the equation focuses on the quantum evolution of the crystal around its center of mass, which helps to demonstrate how the quantum components of crystals react to macroscopic gravity en masse.

The important insight that comes from this experiment focuses on the center of mass movements of the crystal. These motions differ from what quantum mechanics, using the SN equation with self-gravitating effects, says should happen. This study also revealed a number of other peculiar but not contradictory results. Altogether, one of the most profound implications of this discovery would be to prove that gravity is not quantifiable.

At this point in time, the equations are prone to change our view of the universe. The next step is to take the equations and test them using state-of-the-art equipment and discover whether or now our views will be profoundly affected.