The Search for Un-Earth-like Life 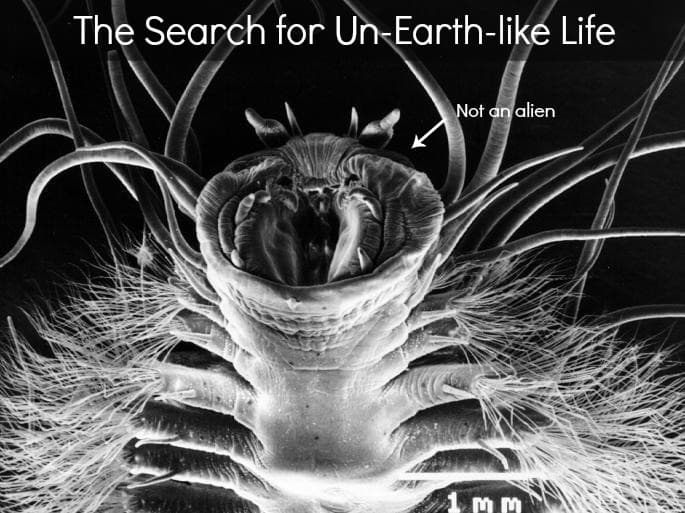 When we talk about the search for life, we use a lot of phrases containing the adjective "Earth-like." We look for "Earth-like" planets in "Earth-like" solar systems with "Earth-like" condition on its surface that could potentially be home to "Earth-like" life. Many, scientists and laypeople alike, imagine the possibility that some of the life in the universe won't be "Earth-like" at all. It's possible (and, some say very likely) that life we find in the universe will be unbelievably strange, completely unlike anything we are familiar with here in our little corner of the universe. So, why is it we always look for life as we know it? Why do we hunt for Earth-like life instead of looking for life in any "impossible" setting?

The answer here is rather simple. At the moment, we only have a single example of life to work with. We know, for a fact, life can flourish under the conditions currently found on Earth (as well as other points in Earth’s history). From this, we use life on Earth as a template for looking out into the universe.

A LIGHT-POST IN THE DARK:

Let us use the electromagnetic spectrum as an example. As I’m sure you’re aware, light exists in many wavelengths, only a fraction of which are visible (cryptically called ‘visible light’). Now, we know the electromagnetic spectrum extends beyond what is visible, but lets rewind 500 or so years before other types of light were known (or, even on the horizon of scientific thought). What that question basically asks is "why don’t we specifically hunt for wavelengths of light that may or may not exist - without having any reason to believe such wavelengths exist?"

Could life inhabit a planet orbiting a star at a distance of a few hundred thousand kilometers? Sure. Could life inhabit planets on the furthest outskirts of their respective solar systems? Certainly. Could some type of interstellar life form have developed in those mammoth clouds of gas and dust? Why not. But, the universe is a very big place. Why not concentrate the search on systems and planets where conditions are favorable to life as we know it? That, after all, is the key phrase. One shouldn’t be completely exclusive when talking about using life on Earth as a template – using the mindset that Earth-like life is the only life that can exist. But, it gives us a way to narrow the search and increase our chances of finding life.

THE NEEDLE IN A STACK OF NEEDLES:

All of that being said, scientists are always open to finding new and unique forms of life, but that starts to raise the question of "what is life?" Simply put, at the moment, we don’t actually know what life is nor do we have a comprehensive working definition of life. We have an innate ‘understanding’ of what life is, the understanding that says fire isn’t alive (though it behaves in a life-like fashion) and a cat is alive (in Schrödinger’s case, it’s also dead).

By narrowing our search, we are pooling our resources in an attempt to find a type of life we know exists. Scientists frequently find planets and solar systems that defy our conventional understanding of what the cosmos should look like (though, we also frequently learn why these unique solar systems exist in such a peculiar fashion). Perhaps, one day, we'll find an oddity in the sky and further investigation will reveal a type of life beyond our wildest imaginations. Then again, maybe our more directed search for Earth-like life might answer one of the deepest questions our species asks, and we'll discover that we are not alone in the universe.