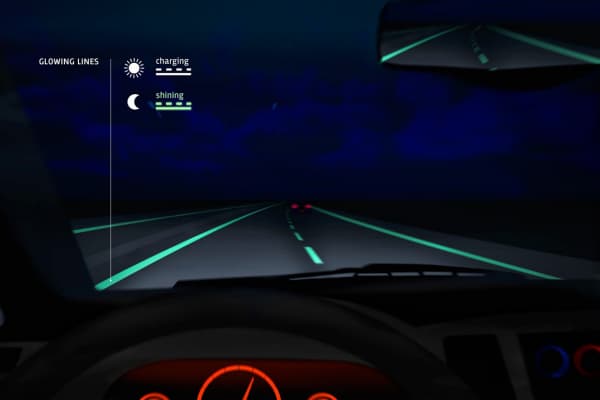 Many individuals have a hard time seeing road lines in the dark, even in the best of conditions. Things get even worse if their is rain, snow, or ice obscuring the road. Poor visibility often leads to innumerable accidents and unsafe driving conditions, and unfortunately, with a ballooning  elderly population, the problem is only going to get worse. However, scientists in the Netherlands are attempting to combat this problem before it reaches a head by installing glow-in-the dark road markings  on their streets. But things are starting off small. This week, these markings replaced streetlights along a 500m stretch of highway in the Netherlands.

This form of lighting could greatly reduce the cost of energy consumption that is necessary in order to ensure proper road lighting, and may make the roads a bit safer (as the lines themselves are lit, as opposed to the entire road). Moreover, this change may be beneficial to other species, as the migratory patters of a number of bird species have been impacted by light pollution (which road lights often greatly contribute to).

The glow-in-the-dark properties that were utilized for this installation were created by using a photoluminescent that was integrated into road paint. Once the strips have been powered, the glow lasts up to eight hours. However, it is unclear how well the installations will stand against the everyday wear and tear that such roads see. Obviously, tires will run over the strips, and animals may parade across them. Only time will tell whether these strips are up to the task, as it goes without saying that patchy and blacked-out road strips will hardly be safe or effective.

Daan Roosegaarde, the founder of the organization that created the installation, asserts that this installation was created for just such testing, and he argues that we need more spaces where we can give such devices a trial run: "We should create labs in the city where we can experiment and explore these kinds of solutions. Like a free zone." Ultimately, this "free zone" could be hugely beneficial, as this particular design was initially proposed in 2012 by Studio Roosegaarde; however, installing even this much of the strip was a lengthy process, as there are a number of government approvals that must be acquired before any changes can take place.

But it was well worth the wait, as the result is rather stunning. One Netherlands news report claims that, "It looks like you are driving through a fairy tale." And there are high hopes that this could improve driving conditions and help decrease energy costs (in addition to looking rather spectacular).