The International Astronomical Union VS Uwingu: The Battle to Name Things in the Sky 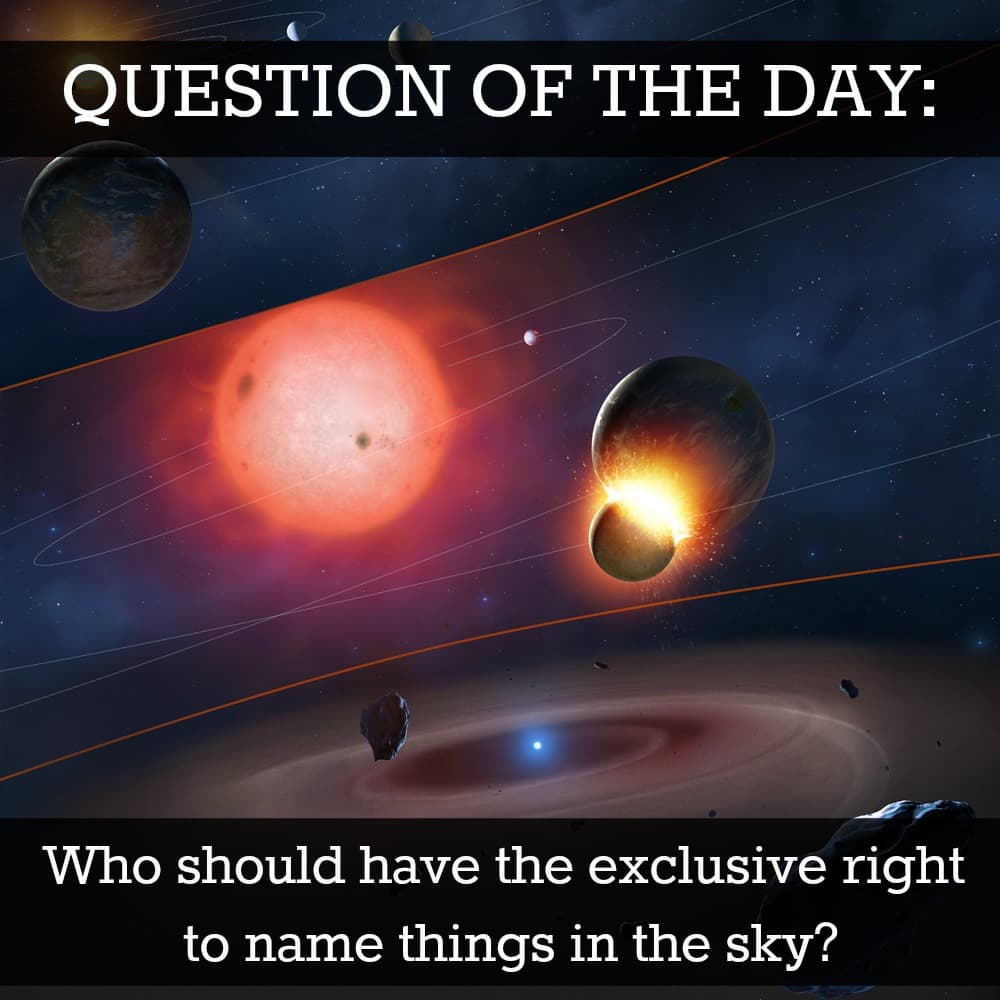 Throughout most of human history, we only knew about the existence of the five classical planets from antiquity – Mercury, Venus, Mars, Jupiter, and Saturn (aside from Earth, of course). However, in the 1500s, the idea of extrasolar planets (exoplanets) wasn’t exactly absurd – the concept of other worlds orbiting other stars was a natural byproduct of the relatively new heliocentric model for the solar system. It wasn’t for another 200 or so years, in 1781, before the first planet was discovered. Uranus entered the scene as the first planet in all of human history that was unknown to our ancestors. Even then, Uranus, and subsequently Neptune, were still within our solar system.

As our knowledge of science increased, it wasn’t a matter of *if* we would find an exoplanet... but when. Finally, on April 21, 1992, a couple of radio astronomers discovered two planets in orbit around a pulsar about 1,000 light-years away. Since then, 1766 exoplanets (and 1076 planetary systems) have been confirmed to exist, with a few thousand more awaiting confirmation (as of March 2014 according to Open Exoplanet Catalogue). Some of our latest estimates suggest that the Milky Way alone could be home to 160-billion planets.

HOW NAMES ARE DETERMINED:

As with most objects in space, exoplanets don’t have names as you and I normally think about them. Instead of being called things like Apollo, Gandalf, or Vulcan, exoplanets receive a name similar to a license plate-- such as GSC 06214-00210 b, HAT-P-27-WASP-40 b, HD 45364 b, or Kepler-9 d. Often times, these names are packed full of useful information about the planet, such as its location in the sky and information about the survey that discovered it. Just don’t expect Pr0201 c to win an award for ‘most awesome name’ anytime soon.

Nobody has a problem with these utilitarian names, but what happens when you want to give a planet a ‘real’ name? This is where our IAU/Uwingu conflict comes into the picture.

Uwingu is a Swahili word which means “sky” and the company was founded by Alan Stern, the principal investigator on the New Horizons mission (you know, the probe currently headed to everyone’s favorite dwarf planet, Pluto). Uwingu’s primary mission objective is to raise money for research and space exploration and to issue the money in the same way that grants are issued. The project is attempting to raise money by allowing the public to name exoplanets – 4.99 USD to submit a name for a planet and 0.99 USD to vote for a name. Recently, the closest known exoplanet to Earth (Alpha Centauri Bb) was given the name Albertus Alauda by this Uwingu voting process. (Note: Uwingu also holds similar naming contests for other bodies or objects, such as a recent contest to name craters on mars).

The IAU, on the other hand, was quick to rebuke Uwingu’s efforts and strongly condemned the idea of ‘buying’ names for exoplanets. They stressed that the IAU is the only body allowed to designate official names for celestial objects. The society consists of 10,871 active professional astronomers (at least at the Ph.D level) representing about 93 nations (of which, 73 are national members) – so they aren’t an ‘arbitrary’ organization. One of the IAU’s mission objectives, as listed on their website, is to “serve as the internationally recognized authority for assigning designations to celestial bodies and surface features on them.” The IAU has a complicated list of rules governing how objects and features are named – they also frequently ignore the wishes of the discovering scientists (a practice that has both it's strong and weak points).

However, that’s not the worst of it. Due to IAU regulations, it’s not uncommon for scientists working in a specific field to be unable to work with relevant decision making bodies within the IAU. This basically means that scientists studying planets aren’t necessarily the men and women who help define exactly what a planet is - this can, naturally, lead to some problems. Another note: the "infamous" 2006 vote that ultimately reclassified Pluto as a dwarf planet was not such a scenario; opening up the dwarf planet category was a good move. The majority of astronomers agree that Pluto and other Pluto-like objects should have their own category, however, many take issue with how the IAU made the decision - that is an article for another time.

The IAU and Uwingu have been involved in a major media battle (and a minor legal one) for the last year or so. The IAU has subtly suggested in various statements that projects like Uwingu are scams and stated that such processes have absolutely no bearing on the official naming process. In response, Uwingu sought to clarify their purpose of simply giving informal ‘people’s-choice’ names in an attempt to raise interest in (and money for) science. The organization also clarified that they are not interested in trying to impose any nomenclature on the astronomical community.

The IAU’s chief argument against organizations like Uwingu naming celestial objects is painfully simple. In an effort to avoid having many names for the same object – potentially causing confusion – the IAU argues that one body should have official say over what objects are named and money shouldn’t be a factor.

The Uwingu argument basically goes something like this: “What’s the harm?” The IAU could very-well be overreaching their authority a little. Astronomers and organizations that support efforts like Uwingu’s are quick to point out two flaws in the IAU defense.

1) Most of the objects in the sky (and CERTAINLY the visible sky) have a wide range of names – some more official than others. Take the closest large galaxy to Earth as an example. Most regularly called the Andromeda Galaxy, this object also has the official designations of Messier 31, M31, and NGC 224 – it is even called the Great Andromeda Nebula in older texts written before other galaxies were known objects. What about the second brightest star in the constellation Orion? Most commonly called Betelgeuse (in itself a mispronunciation of the original Arabic name), is also called Alpha Orionis (which gets abbreviated as both a Orionis and a Ori), in addition to several license plate names such as HR 2061 and J05552+0724AP.

2) On the other side of the spectrum, we have objects like Messier 51a (also ‘officially’ known as M51a and NGC 5194). Colloquially, the object is also known as the Whirlpool Galaxy – a perfectly acceptable name and, if used, a name that any astronomer will immediately recognize and understand. The Eagle Nebula is also an informal, but very popular, designation for the (seemingly) officially named Messier 16, M16, or NGC 6611 – this object is also known as the Star Queen Nebula. Personally, I’ve been unable to discover whether that name is ‘official’ or ‘unofficial’. What is certain, though, is the Milky Way – you know, the galaxy in which we live – is not an IAU-sanctioned name, yet most everyone on the planet will immediately recognize the name and understand what you are talking about.

In the end, the IAU can posture and flex all it wants, but ultimately, the naming of objects isn’t completely up to the IAU, Uwingu, or any organization, but rather popular opinion. The utilitarian license plate names aren’t and shouldn’t go anywhere. Whether Gliese 876 b is eventually named James Kirk might be spearheaded by the IAU, a company like Uwingu, or an awesome website (hint hint), but whether the name sticks ultimately lies in the hands of the general public.

Not that that is necessarily a good thing...