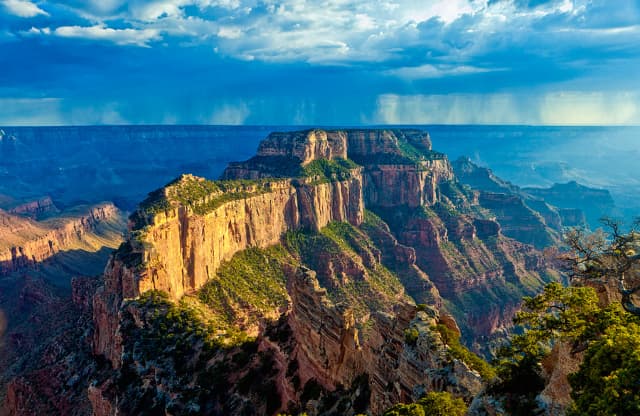 Obviously, when we look at a distant galaxy, we are able to quickly grasp just how small we truly are; however, we don't need to gaze off into the night sky to be amazed by our Lilliputian size (Gulliver's Travels, anyone?). In order to get a sense of the immensity of our world, ultimately, the only thing that we need to do is stand at the brink of the Grand Canyon.

The Grand Canyon is a little over 270 miles (440 km) long, and at its largest gap it extends just about 20 miles (29 km). To give you a bit of a comparison, the state of Rhode Island is a mere 48 miles (77km) long and 37 miles (60km) wide. Ultimately, the canyon is just 25 miles (40 km) shorter than Ireland. And it is deep. At its deepest point, it extends down over a mile (6,000 feet or 1,800 meters).  What's more? Not only is the Canyon mind-blowingly large, but it's also one of Earth's very few natural surface features that can be seen from satellites in low-Earth orbit (LEO).

The Colorado River carved this structure across what is now known as the stare of Arizona. Of course, when this mighty river carved its path, Arizona didn't exist. Although there is still some debate regarding the specific geologic processes that formed the Grand Canyon, the most accepted theory suggests that the Colorado River started its winding course through the canyon at least 17 million years ago. Previous analyses had the date of origin starting a mere 5 to 6 million years ago. These time-frames might seem rather impressive, but considering the age of the Earth, the Grand Canyon is actually rather young.

Ancient Puebloan peoples are the first known inhabitants of this area. It is believed that they arrived at the Canyon sometime around 1200 BCE. It was another 2740 years before the first European would set eyes on this amazing sight. In 1540, Captain Garcia Lopez de Cardenas (from Spain), along with Hopi guides, traveled to the South Rim of the Grand Canyon between Desert View and Moran Point. This was the start of the tourist industry in the Grand Canyon. Currently, over 5 million visitors travel to the Canyon each year. Since the industry truly picked up in the  1870s, there have been some  600 fatalities. A number of these  deaths result from careless photographers attempting to take risky pictures, and some 200 are attributes to various plane crashes.

Unsurprisingly, a number of ecological battles have been fought over the Grand Canyon over the years. For example, when Theodore Roosevelt attempted to make the area into a National Park in the early 1900s, he was vehemently opposed by land and mining claim holders; however, the Grand Canyon area has some of the cleanest air in the United States.