The Consequences of Underestimating Solar Could Prove Devastating

“Continuing to underestimate the role of solar risks squandering this opportunity."

A recent study shows that we have been underestimating the solar energy industry’s expansion for almost two decades — an error which may have serious consequences for both the industry and the planet. The release of the study was close in time to the release of a paper commissioned by Energy Secretary Rick Perry, the latter intended to assess the national electric grid.

While the DOE’s report was favorable to coal and nuclear power, this research indicates that predictions of solar energy deployment have consistently underestimated actual performance. For example, the International Energy Agency consistently predicted solar deployment growth rates that were 16 to 30 percent lower than the actual rates proved to be. 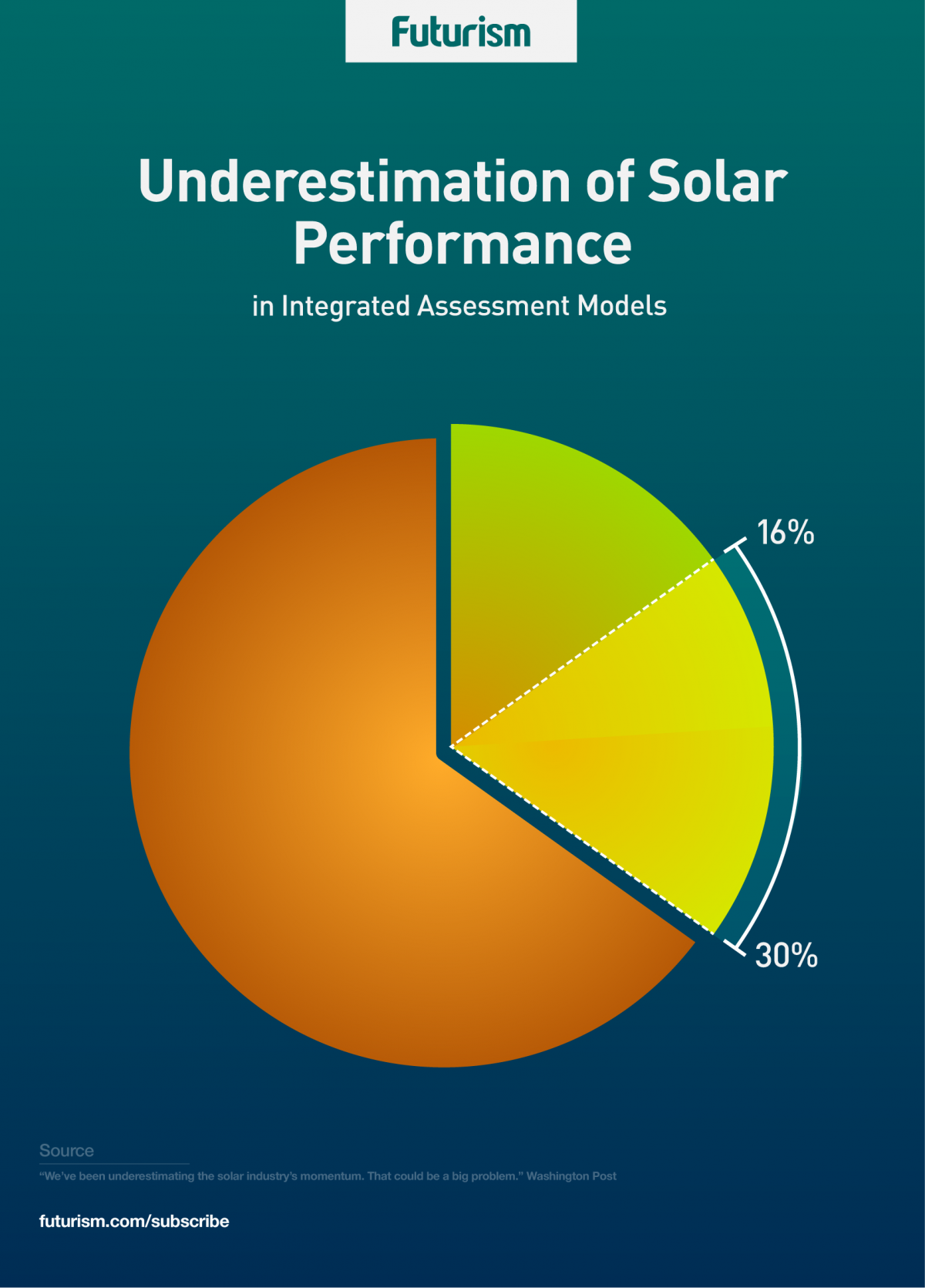 Scientists explain the observed discrepancy as follows. First, assessment models have frequently failed to take various national policies designed to assist renewable energy into account. In the US, for example, new solar installations are supported by an investment tax credit, while feed-in tariffs, which pay consumers for renewable energy they generate and donate back into the grid, have been enacted by other nations around the world.

The study also notes that the cost of solar panels has been dropping more quickly than predicted, while, despite high expectations about the expansion of other low-carbon technologies such as nuclear power, the realistic potential of other sources has fallen somewhat short. Still, because various studies assume these other low-carbon alternatives will develop faster than they have, they leave less “room” for solar development.

Researchers provided an updated model with what they say is a more accurate series of predictions about the future of solar energy. The study’s authors are confident that solar might achieve a 30 percent share of worldwide electricity generation between 2035 and 2050, even though it only holds a little more than 1 percent now.

Solar power performing better than anyone predicted sounds like purely good news, but this ongoing underestimation signals a political problem that might only worsen. If policymakers are too reluctant to back photovoltaics and don’t understand solar’s full potential, they are unlikely to prepare the grid to support solar’s continued expansion — and this will hurt.

Solar relies upon such grid preparations because it is an “intermittent” energy source, meaning it requires either battery storage or an alternate source when the sun isn’t shining. This means that the grid will need improvement: it must either be able to store more solar power in the existing system, or be enhanced with added fast-ramping assets that can take over instantly whenever solar isn’t available. Either way, more research, development, and infrastructure work will be needed, but none of that will get funded without policymakers who understand the true potential of solar.

“We conclude that reaching a solar economy would require policymakers and society to overcome organizational and financial challenges in the next decades but would then offer the most-affordable clean energy solution for many,” the authors wrote. “Continuing to underestimate the role of solar risks squandering this opportunity.”

Is Solar Power Worth It? This Free Cost Benefit Estimator Has The Answers.

On the Fence About Solar Panels? A Free Solar Cost Calculation Can Help.

If You’re Interested in the 2019 Solar Tax Credit, It’s Now or Never