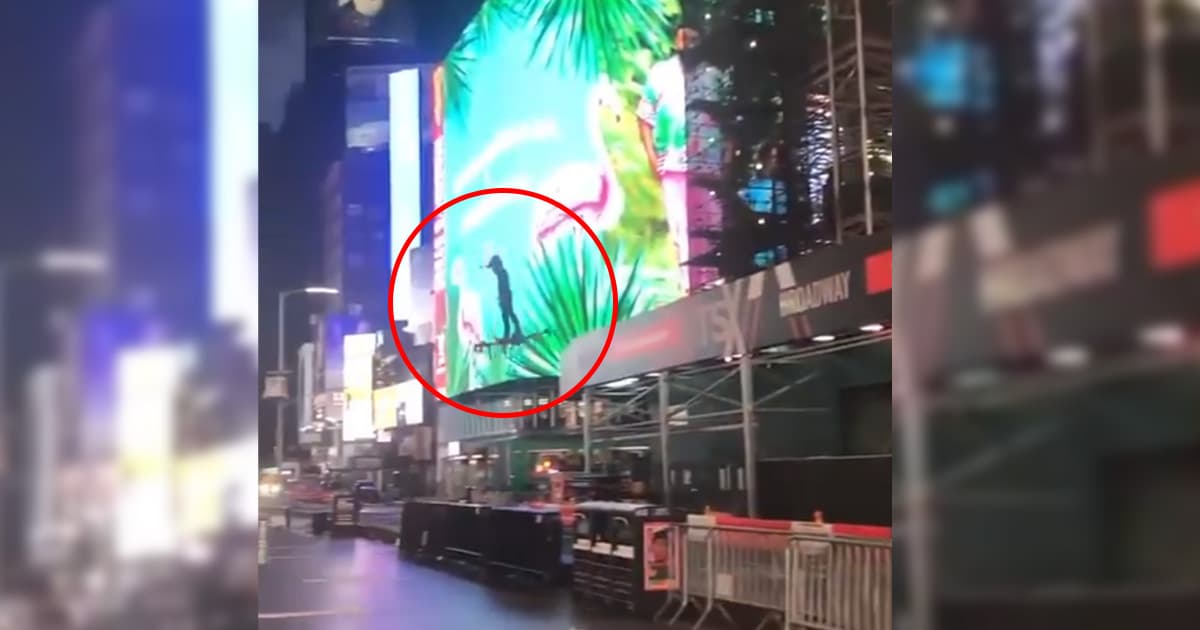 A new video going viral on social media shows a helmeted daredevil shooting through Times Square in New York City — on what appears to be a giant, eight-rotor drone, cruising a solid ten feet above the ground.

It's a stunt particularly reminiscent of the Green Goblin, played by Willem Dafoe, flying through NYC in director Sam Raimi's blockbuster "Spider-Man" (2002).

Is this really future of personal transportation — or was it a reckless stunt that could've gotten somebody hurt? Either way, it's pretty wild to watch.

Oh nothing - just a dude flying around NYC… pic.twitter.com/qJp2mKgV8R

It's still unclear when the video was taken or who the pilot is — but there's a chance we may have seen him before. In late April, a video emerged of a man shooting through a city landscape on what looked like a very similar high-powered drone featuring eight propellers.

In fact, a YouTuber named Hunter Kowald may have been behind the stunt. Recent behind-the-scenes videos uploaded to his channel show all the prep work that went into a similar-looking stunt in late April.

It's unclear, however, if the channel was behind the Times Square stunt as well.

We don't know if the latest joyride through Times Square was permitted by local law enforcement — but it certainly managed to turn many heads.

Update: An earlier version of this story misidentified the manufacturer of the giant drone.

More on the stunt: Man Sighted Flying Through City on Giant Drone

Bumper Drones
Cargo Drones Have One Problem: Not Crashing Into Things
3. 28. 19
Read More
Gatwick Chaos
We Have No Idea How to Deal With Unexpected Drones at Airports
12. 21. 18
Read More
Uber Plans To Launch Flying Taxis With Technology That Doesn’t Exist
5. 7. 18
Read More
+Social+Newsletter
TopicsAbout UsContact Us
Copyright ©, Camden Media Inc All Rights Reserved. See our User Agreement, Privacy Policy and Data Use Policy. The material on this site may not be reproduced, distributed, transmitted, cached or otherwise used, except with prior written permission of Futurism. Articles may contain affiliate links which enable us to share in the revenue of any purchases made.
Fonts by Typekit and Monotype.