Supernovae may Drive Evolution on Earth: 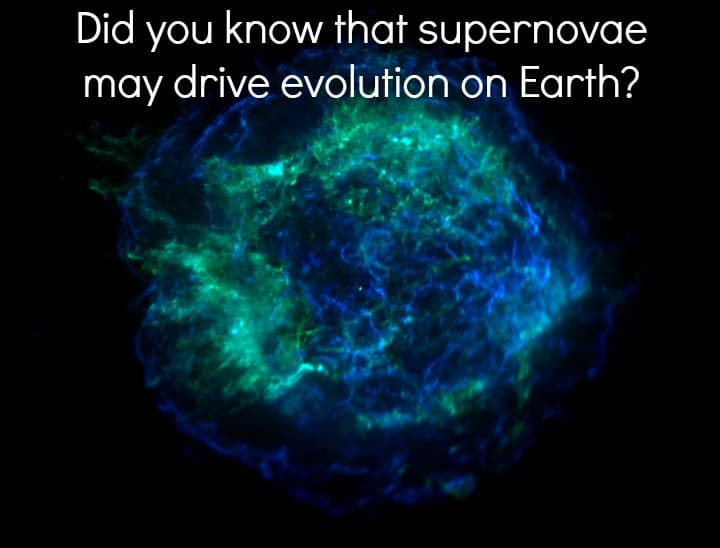 On Earth, we have an almost incomprehensible array of life. It comes in millions of different forms (the best estimate puts the figure at 8.7 million species, not counting bacteria). What's more, these organisms are only an addition to the species that have long been extinct. What causes such diversity?

The answer seems rather simple -- seemingly random genetic mutations drive evolution. These mutations are the raw materials of genetic variation; without them, evolution could not occur. But what actually drives these random mutations? Well, this is where things get a little complicated; however, new light has been shed on one possible factor – supernovae.

Cosmic rays are an assortment of sub-atomic particles that reach Earth travelling at great speeds (sometimes near the speed of light). These fast moving particles continuously bombard the Earth, and they are thought to primarily come from supernovae explosions.

As these cosmic rays reach our atmosphere they collide with other molecules, producing a shower of other particles that rain down on the surface of Earth. Most of these pass harmlessly through an organism, but some researchers think that some of the the particles may strike through the genetic material inside biological cells and slightly alter their codes. This may produce a direct mutation in the living organism, or produce a mutation in any descendants that it may produce. If this theory is true, then cosmic ray particles will be one of the biggest drivers of evolution, not just on Earth -- but everywhere in the Universe!

However, this unusual relationship between distant stellar explosions and evolution on Earth doesn’t end here. In the words of Henrik Svensmark, who heads the research into the relationship between supernovae and evolution, “The biosphere seems to contain a reflection of the sky, in that the evolution of life mirrors the evolution of the Galaxy.” The findings – based on geological and astronomical data - suggest that nearby supernovae have strongly influenced the development of life over the last 500 million years.

Svensmark began by studying open star clusters where there is intense star formation and supernovae activity. He was able to map when supernovae occurred near the solar system over time, and when he compared this with the geological record, he found a remarkable correlation. It seems that when the Sun passed through the spiral arms of the Milky Way, where large stars are most common, life appeared to prosper. Combined with the tectonic activity, these two factors appear to correlate with nearly all of the variations in the diversity of life of the past 500 million years.

Marine fossils (typically invertebrates such as trilobites, as well as plants and microbes) are a very good indicator of what conditions were like, and the diversity of any life that existed at a certain point in time. When the rate of nearby supernovae is high, the level of carbon dioxide is low, and this points to the thought that plant life may have been very high – as it would use up the carbon dioxide. But plants also ‘dislike’ carbon 13, and they leave it behind. This isotope can be seen in the geological record, and the changes in the level of which further provides quantitative data to back up the theory.

There has also been a match between the patterns of particular geological periods - as they start and end with either an increase or decrease in the supernovae rate. Supernovae are thought to cause sea levels to drop, as they appear to coincide with ‘ice ages’ or glacial periods. During this time, a lot of water is stored on the land as snow and ice – so the sea level stops (we call these changes glacial-eustatic). As a result the species that dominate a certain period (be it warmer or colder) changes as each passes.

Overall, the data supports the idea that cosmic-rays are linked to climate change in the long term, and it is these climatic alterations that lead to the biological effects. The link is actually even larger than that between our climate and our own Sun’s activity! It goes to show the extent to which the Universe is intertwined; just because objects are situated many light-years away from one another, they can still have an impact in extremely significant ways.