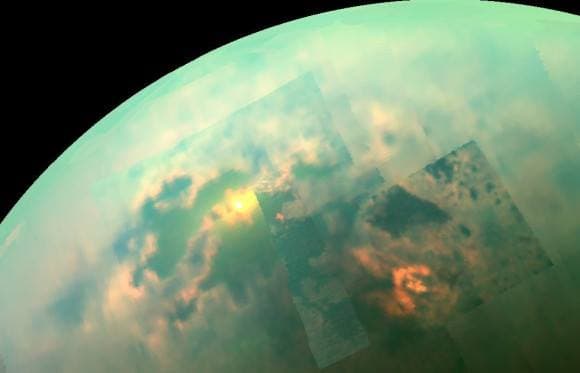 Titan is one of the most amazing places in our solar system.  It is the largest of Saturn's 53 moons and it is the second largest moon found in our solar neighborhood (only Jupiter’s Ganymede is larger than it). We've known for some time that Titan has lakes, as radar images from the Cassini spacecraft revealed a virtual land of lakes in Titan’s northern hemisphere. However, we've accomplished a new feat: We caught sunlight glinting off of the seas in one amazing view.

READ NEXT: You Could Fly On Titan

The lakes in the Northern Hemisphere are about the size of North America’s Great Lakes. But if you happen to be thinking about having a refreshing drink from a Titanian spring, I should probably mention that most of this liquid is likely methane (which changes from a gas to a liquid at -117F/ -83C). And it seems that the methane has been quite busy, because Cassini also detected canyon-like structures on the surface of the moon.

So it may not be terribly conducive to Earth-based life. But it's sure a sight to behold.