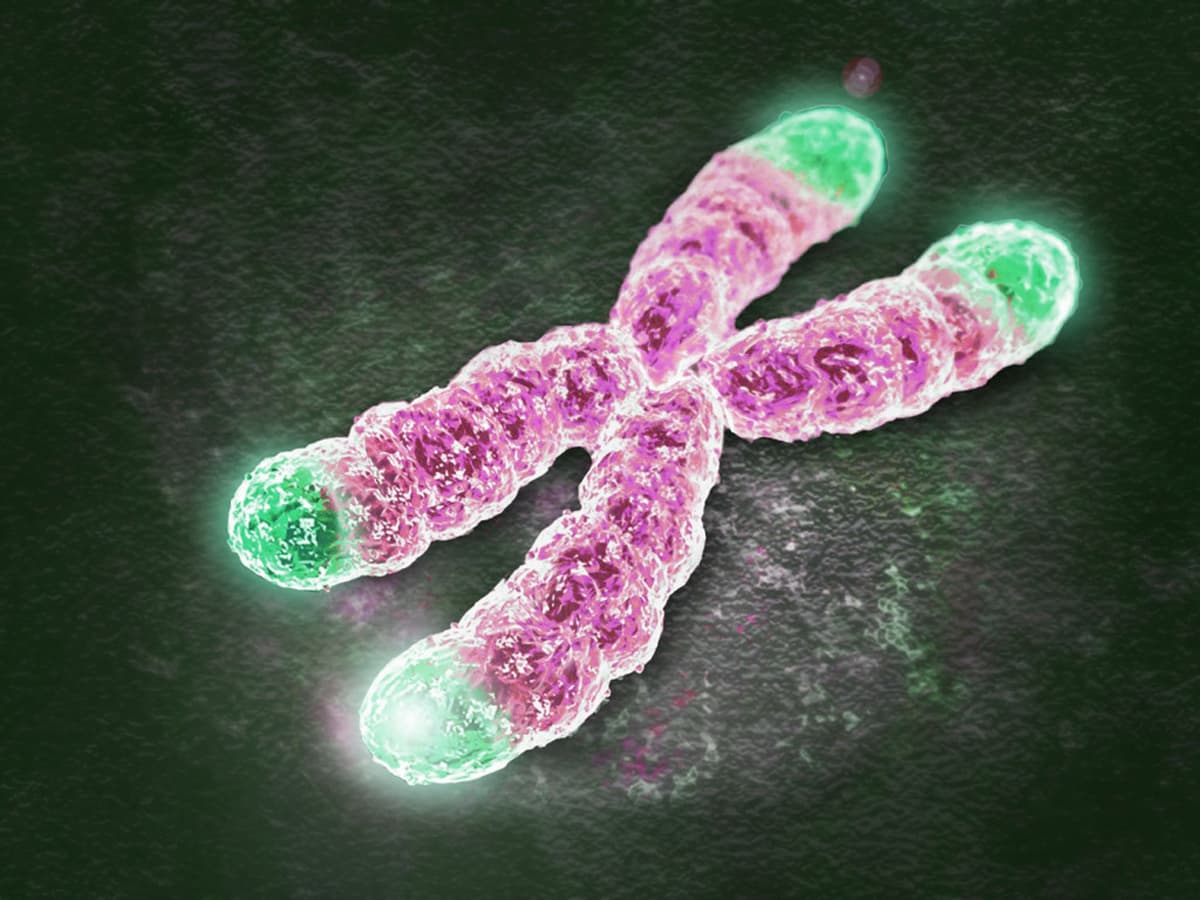 We all know that, inside the nucleus of a cell, our genes are arranged along twisted, double-stranded molecules of DNA (these are called "chromosomes"). The ends of the chromosomes contain bits of DNA that are called "telomeres." These telomeres play a vital role in maintaining our health. Not only do they protect our genetic data, they make it possible for cells to divide, and may hold some secrets to how we age and get cancer.

When chromosomes replicate, a mechanism in the enzymes involved with the process prevents duplication to the extremes of the chromosomes. Therefore, each duplicated chromosome is shorter than its predecessor. This shortening is notable, as the telomeres function as disposable buffers that prevents duplication of mutated DNA (and these telomeres are ultimately what are being shortened). These duplicated, shortened telomeres should, over time, be replenished by the enzyme telomerase reverse transcriptase, an enzyme expressed by human stem cells.

However, the replenishing process slows over time, and as a result, the telomeres are shortened and weakened over the course of one's life. It is this process that limits cell division activity, and leads to both cellular ageing and the ability for disease and DNA mutation to take place as (for further clarification, see the graph below).

Scientists from the Stanford University School of Medicine say that they have discovered a way to replenish the length of telomeres, thereby opening up great possibilities in the treatment of ageing linked genetic diseases. And we might even be able to reverse ageing itself.

The researchers claim to have used a modified RNA containing the exact nucleotide sequence of telomerase reverse transcriptase (TERT). They call this new RNA "modified TERT mRNA." They assert that just three applications of this, over a few days, caused an increase in telomere length of as much as 10%, representing approximately 1,000 nucleotides.

Applying the technique to human muscle cells increased cell division approximately three-fold. The truly exciting and ground breaking discovery came when the same routine was used with human skin cells. These cells divided around 28 times more than the placebo.

Experiments with TERT therapies have been attempted before, and with some success, but brought about an immune response to the modified enzyme in each case. The new technique employed by the team at Stanford has produced no such response, Also, the rate at which division was increased suggests that any side effects could be limited for patients, due to the need for only short, infrequent applications.

Duchenne muscular dystrophy is a disorder affecting approximately 1 in every 3,600 males. It is a recessive, X-linked form of regular muscular dystrophy. Duchennes is an extremely aggressive form of the disease, which leads to rapid muscular breakdown and eventual imminent death.  The disease usually presents in infancy, but  it can be tested for at birth if susceptibility is suspected. This new technique, while not providing a cure, could lead to doctors being able to slow or even halt muscular atrophy in sufferers by application directly to the affected muscle groups.

Other age-related conditions, indeed virtually all age-related conditions, such as heart disease, could benefit from this amazing new leap in modified RNA treatments. Those with certain  hereditary cancers may also be able to benefit from this discovery in the near future, as the replenishment of the telomeres of vulnerable cells may lead to the slowing or even prevention of carcinogenic mutations.

The implications of these findings, which have  blossomed from over 50 years of study and research, are simply mind-blowing. Slowing, or even halting of the ageing process has, up to now, sat firmly in the realms of science fiction.  One thing is for sure, cosmetic surgery departments worldwide will be watching this one closely as, if successful, the hordes of people seeking eternally young skin will be banging at their doors.