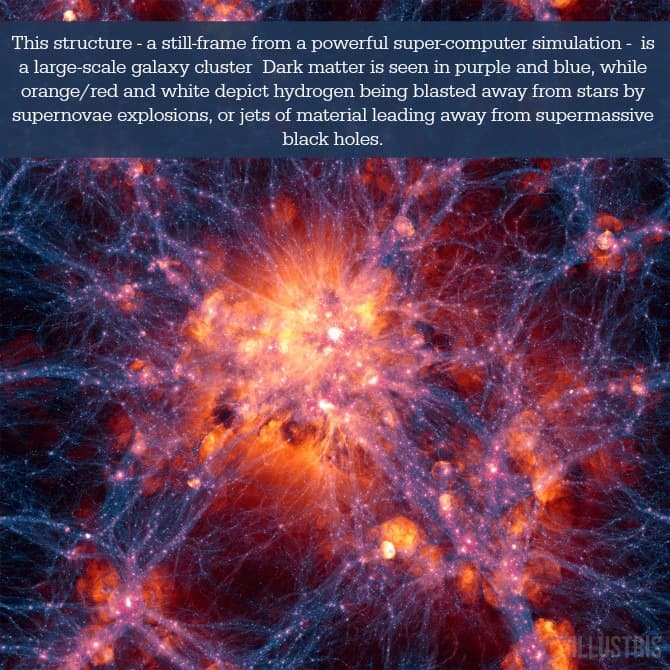 The simulation below — brought to you courtesy of the Illustris project — allows us to see more than 13 billion years of cosmic evolution within mere minutes.

Led by Mark Vogelberge (in corroboration with the Harvard-Smithsonian Center for Astrophysics, MIT and various other space agencies), the team formulated this stunning simulation using an entire network of powerful supercomputers. It begins just 12 million years after the big bang "sprung" the entire universe into existence, subsequently showing the original epoch, when the very first generation of stars turned-on their lights for the first time.

To appreciate just how groundbreaking this type of program is, Illustris took more than five years to code to completion, while the simulation itself took about 3 months to put together using 8,000 CPUs of brainpower. Previous, normal-computer based programs would require some 2,000 years worth of work to adequately portray the actions leading to the cosmic expansion of the universe; the formation of stars, galaxies and other large-scale structures; along with the evolution of all sorts of other celestial phenomena.

According to the team's website, the simulation of the universe's evolution from the big bang to now, 13.8 billion years later, is concentrated in to a cube measuring in at 350-million light-years on one side, containing more than 41,000 galaxies; a nice mix of spirals, irregulars and elliptical galaxies. (Our own galaxy is a barred spiral, while its closest neighbor, the Andromeda Galaxy, is a normal spiral galaxy. Both will change shape when they collide in about 5 billion years time, sparking the creation of a much larger, elliptical galaxy). Moreover, the simulation includes data meaning to depict the concentration of both normal matter —  the type that we can see, feel and interact with —  and dark matter —  the elusive, invisible matter that makes up quite a large fraction of the overall mass of the universe. The latter is illustrated using more than 12 billion 3-dimensional pixels.

Furthermore, the team say that their simulation is so detailed that it is just as accurate on a small scale.  Along with the immensely large non-galaxy structures, like voids and supervoids, and parts of the great cosmic web of the observable universe; one can even see the exotic chemistries of individual galaxies. The energetic outflows of supermassive black holes and supernova explosions were also included, though it would seem as if capturing the feedback from these events proved problematic for Illustris.

Regardless of the details, the Illustris Project has done the seemingly impossible; it has given us an unprecedented look at each epoch leading from the big bang until the present day. In this respect, it has allowed us to look back in time, to see how the universe evolved from a much different, less dynamic place, into a place that allowed life to crop up and survive for more than a billion years.

It will also prove to be a stepping stone for developing simulations that show how the universe will continue to evolve down the line.

The paper was published in "Nature" yesterday Access it here.