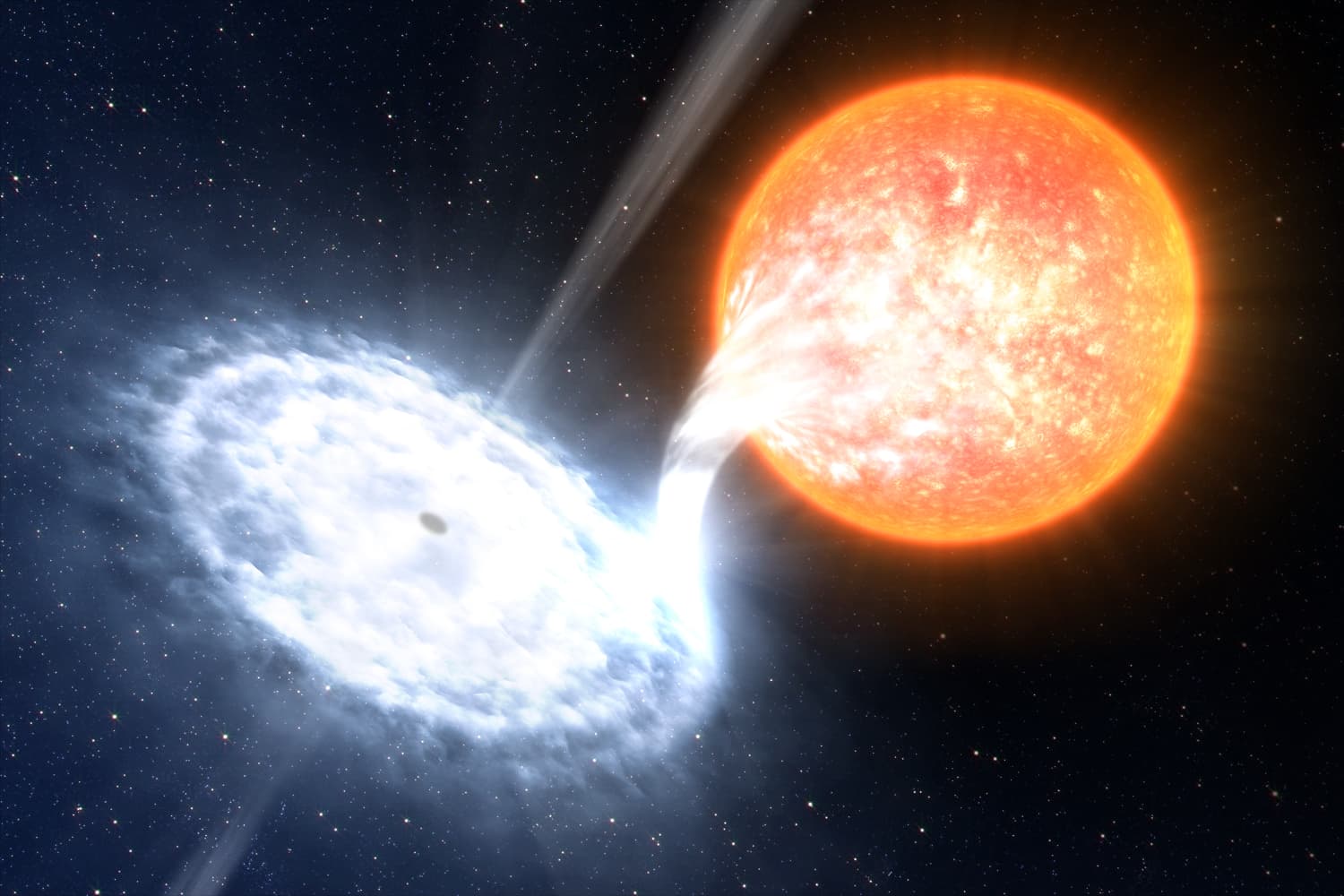 As black holes are areas of space with extreme mass and density, they produce gravitational forces so strong that they stop the escape of matter, gas, and everything—even light. This means that black holes are entirely invisible. We cannot even hope to see them; they are a kind of void in the fabric of space and time.

However, we can see them (or at least, we can infer their existence) based on the way that they operate under various conditions.

Case in point, scientists have long theorized that, when a black hole is given a large amount of gas (such as a massive star), a fast-moving jet of plasma can escape from near the black hole's rim, which is known as the "event horizon."

To break this down a little, the plasma jets are elementary particles that shoot out of the ends of the black hole's magnetic field. And the event horizon defines the boundary that, once you cross, you can never return. At this point, gravitational forces are so strong, the speed of the escape velocity surpasses the speed of light. Of course, nothing can go faster than the speed of light, ergo, nothing can return once it crosses a black hole's event horizon.

What scientists recently observed gives further proof of this prediction. Ultimately, astrophysicists witnessed  a star being swallowed by a black hole and ejecting a flare of matter moving at nearly the speed of light.

Scientists have watched black holes devour stars before, and they’ve seen jets of hot matter escaping their mouths before too, but this is the first time that the two events have been seen together so clearly.

The star, which has (or had) a similar size to our Sun, was observed shifting from its normal path and slipping into the gravitational pull of the supermassive black hole. A simply stellar even to behold (sorry, bad pun).

As soon as it was known that a star was being shredded by a black hole, scientists scrambled to study it. Radio telescopes were used to catch the astronomical event and, by the time it was done, the team had data from satellites and ground-based telescopes that gathered X-ray, radio, and optical signals.

Ultimately, this provided an impressive "multi-wavelength" picture of the action.

It was also confirmed that the light was not from an accretion disk. Accretion disks are expansive swirling masses that form when a black hole is sucking in matter from space. As the material swirls around and around the black hole before falling in (much like water circles around a drain), the material rubs together and produces excessive amounts of friction and, thus, heat. This heat glows, producing light. However, these rings look substantially different than the jets the astronomers observed.

For several months, the team saw how the star was destroyed followed by the launch of a conical outflow, also called a jet, composed of stellar debris that was released from the edge of the black hole.

Read This Next
Outing Life
Swiss Government Scientist Says We May Be on the Brink of Discovering Alien Life
Planetary Seeds
Interstellar Visitor Like 'Oumuamua May Have Formed Earth's Core
Black Hole Sun
Here's the Best-Ever Image of the Black Hole Devouring Our Galaxy
Bright Spot
Newly Spotted Quasar Is 600 Trillion Times Brighter Than the Sun
Futurism
For the First Time Ever, Scientists Found Alien Worlds in Another Galaxy
More on Off World
Space Billboards
6:24 PM on futurism
Russian Scientists Propose Plan to Launch Huge Advertisements Into Orbit Over Cities
Space Anna
5:04 PM on the byte
SpaceX Launches Russian Cosmonaut to ISS Despite Nuclear War Threats
Boom!
Yesterday on the byte
The Devastation From NASA's Asteroid Collision Looks Unbelievable
READ MORE STORIES ABOUT / Off World
Keep up.
Subscribe to our daily newsletter to keep in touch with the subjects shaping our future.
+Social+Newsletter
TopicsAbout UsContact Us
Copyright ©, Camden Media Inc All Rights Reserved. See our User Agreement, Privacy Policy and Data Use Policy. The material on this site may not be reproduced, distributed, transmitted, cached or otherwise used, except with prior written permission of Futurism. Articles may contain affiliate links which enable us to share in the revenue of any purchases made.
Fonts by Typekit and Monotype.