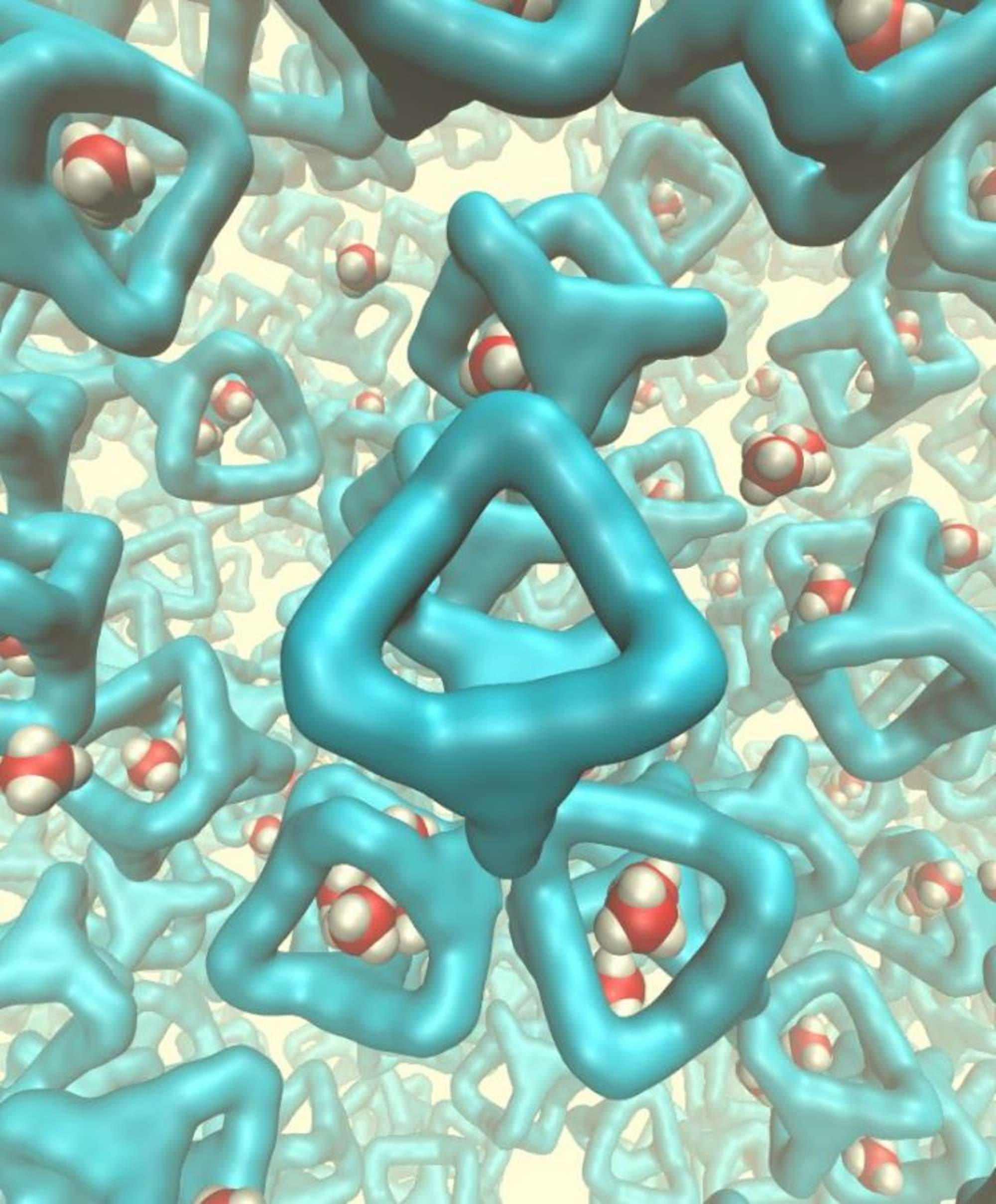 Scientists from the School of Chemistry and Chemical Engineering at Queen's University of Liverpool, and an international team of collaborators, have invented the first porous liquid. Additionally, the team found that this material can dissolve unusually large amounts of gas that are absorbed into the “holes” in the liquid.

The research, which spanned three years, could lead to more efficient and environmentally friendlier chemical processes, including the process known as carbon capture. Carbon capture is the trapping carbon dioxide from major sources—for example, a fossil fuel power plant—and storing it to prevent its entry into the atmosphere. The goal of this process is to help reduce anthropogenic climate change, which is largely driven by the amount of carbon released into the atmosphere by human industry.

In making the porous liquid, the shapes of the molecules were designed so that the liquid could not fill up all the space. The empty holes ultimately allowed the liquid to dissolve large amounts of gas.

Porous materials are used in manufacturing several products, such as plastic bottles and petrol; however, these porous materials have always been solids or perhaps foam-like materials, never liquids. This is the first time that a liquid has been shown to be “porous.” It is also the first demonstration of a how liquids can dramatically increase the amount of gas they can dissolve by creating holes in them.

The scientists assert that years of research are still needed to realize the full potential of such a technology. Any industrial applications would result to new or improved chemical processes, especially those that rely on the dissolution of gases.

Read This Next
Brands We Love
The New 'What if 100' Book Uses Real Science to Answer Wild Hypothetical Questions
Brands We Love
Watch Thousands of Thought-Provoking Shows and Documentaries on Curiosity Stream
Brands We Love
Go Beyond The Science Headlines With The Fundamentals Of Physics Course
Brands We Love
Every Science Lover Needs This Subscription Box in Their Life
Brands We Love
CuriosityStream Is a Science-Focused Streaming Service for People Who Love to Learn
More on Hard Science
Total Drama Island
Wednesday on the byte
Journal Retracts Study on Room Temperature Superconductors
Tell Us How You R...
Tuesday on the byte
Former Particle Physicist Absolutely Annihilates the Field of Particle Physics
Long Live
Sep 25 on futurism
Giving Baby Mice This Drug Makes Them Live 10 Percent Longer
READ MORE STORIES ABOUT / Hard Science
Keep up.
Subscribe to our daily newsletter to keep in touch with the subjects shaping our future.
+Social+Newsletter
TopicsAbout UsContact Us
Copyright ©, Camden Media Inc All Rights Reserved. See our User Agreement, Privacy Policy and Data Use Policy. The material on this site may not be reproduced, distributed, transmitted, cached or otherwise used, except with prior written permission of Futurism. Articles may contain affiliate links which enable us to share in the revenue of any purchases made.
Fonts by Typekit and Monotype.