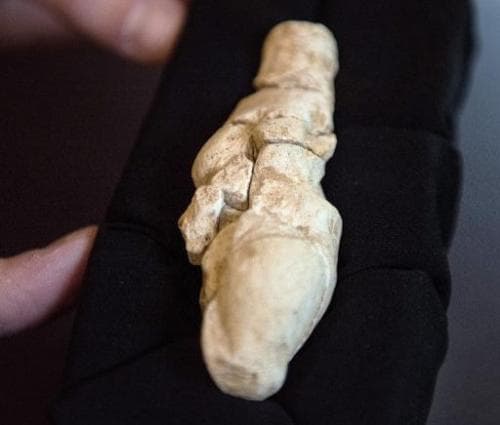 Archaeologists stumbled on the Paleolithic-era sculpture during a dig in the summer in Amiens, the first such find in half a century.

"The discovery of this masterpiece is exceptional and internationally significant," said Nicole Phoyu-Yedid, the head of cultural affairs in the area, on showing the find to the media."We were expecting to find classical vestiges such as tooled flint or bones," said archaeologist Clement Paris.

But on their second day of fieldwork, the team found a pile of limestone that included fragments which did not seem natural. "That same night we carefully pieced together the 20-odd fragments and realised it was a female statuette," he added.

Carbon-14 dating of organic material found at the site showed the statue to be 23,000 years old.

About 12 centimetres (4.7 inches) high, it shows a woman with big breasts and buttocks. The head and arms are less detailed.

"The fact that the sculpture is not totally realistic shows the intent was to produce a symbolic image of a woman linked to fecundity," Paris said.

Around 100 such figures have been found in Europe, mostly in Russia and central Europe, including around 15 in France, most of them discovered in the southwest.