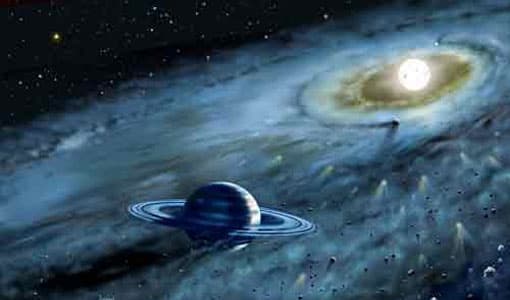 We've just received further proof that we are not alone in the universe. Although we didn't discover alien life, we did discover a new family member: Our Sun's sister (or brother). Meet HD 162826, a star that emerged from the same cloud of dust and gas as our own shining star. This means that we are composed of the same material, the same star dust, as HD 162826. Ultimately, this is the cosmological equivalent of sharing DNA. The study announcing this find is set to appear in an upcoming edition of the Astrophysical Journal; however, you can get an early glimpse of the information in "Elemental Abundances of Solar Sibling Candidates."

HD 162826 was identified as a solar sibling by Ivan Ramirez and his team at the University of Texas at Austin. It's a bit of a distant relative, as it's located 110 light-years away in the constellation Hercules. Admittedly, 110 light-years may seem like a long way off; however, considering the billions of years that have passed since its early days in the dust cloud, 110 light-years is just across the stellar street.

The scientists were able to determine that this star emerged from the same dust cloud as the Sun because of the location and chemical composition. Originally, there were 30 possible candidates. Ramirez's team was able to match this star to our own by using a high-resolution spectroscopy to determine the stars' chemical make-up. Next, they plotted the orbits of all of the stars (where they had previously been and where they are heading).

Ultimately, the chemical analysis and orbital calculations left our Sun with just one sibling: HD 162826.

Unfortunately, there is a little chance that HD 162826 has planets that would be hospitable to life. This is primarily because the star is not known to host any planets at all. The easiest planets to detect are massive beasts, like Jupiter, that cause their star to wobble as they orbit around it. To date, there have been no such planets found around HD 162826. That said, studies have not completely ruled out smaller, terrestrial planets.

However, Ramirez asserts that, when these stars were forming in the initial dust cloud, impacts between early planetoids may have knocked chunks off of them. These bits, it turn, may have traveled between solar systems, possibly bringing primitive life to Earth. "So it could be argued that solar siblings are key candidates in the search for extraterrestrial life," Ramirez noted in a release. Further studies will be necessary to determine just how much this star is like our own and whether or not it hosts planets and (potentially) life.