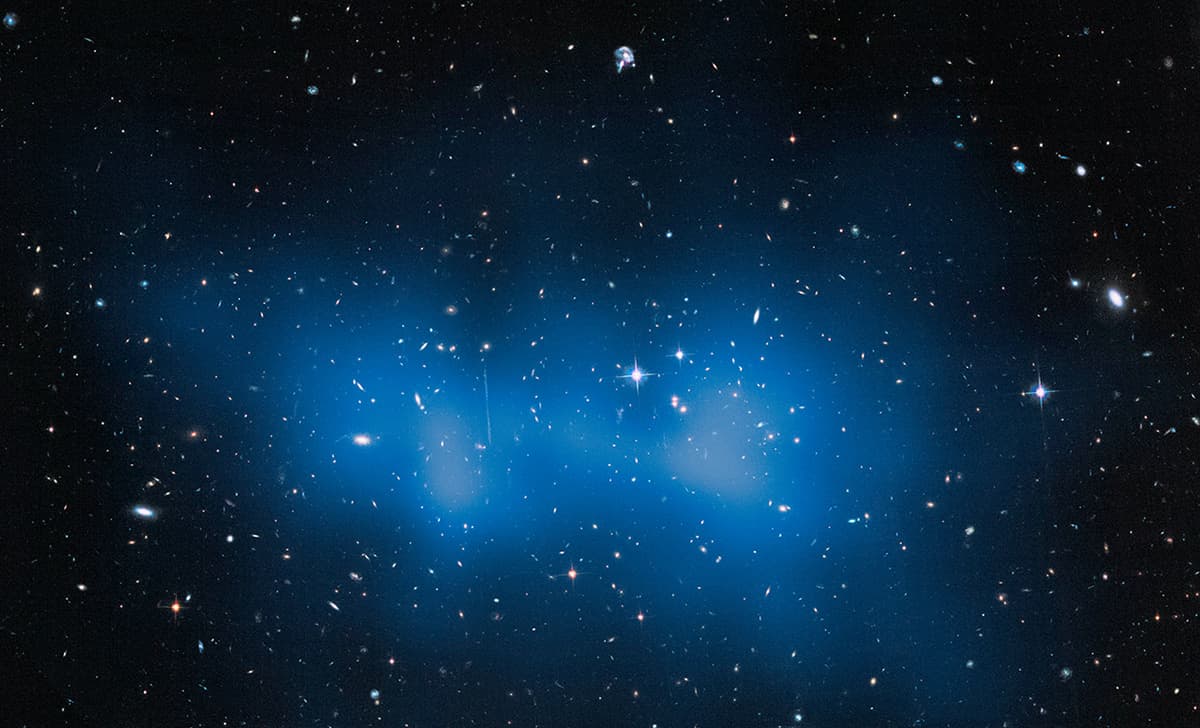 Scientists recently determined that the most massive galaxy cluster ever observed in the early universe is even more massive than astronomers had previously anticipated. New measurements recently acquired by NASA's Hubble Space Telescope reveal that the galaxy cluster nicknamed "El Gordo" (Spanish for "the fat one") contains about as much mass as 3 quadrillion suns. Ultimate, this is a mass that is equal to 3 million billion times the mass of our Sun.

This new determination is roughly 43 percent larger than what had previously been estimated. This cluster, formally designated ACT-CL J0102-4915, is some 7 billion light-years from Earth. This means that astronomers are seeing the cluster as it existed 7 billion years ago, when the universe was less than half of its current age (which is about 13.8 billion years). Based on current cosmological models, scientists estimate that beasts of this magnitude are rather rare, especially this early in the universe.

So, does this epic amount of mass mean that this cluster is teeming with stars? Well, it is, but there aren't as many as you might anticipate. This is because several hundred galaxies inhabit this cluster; however, only a fraction of this mass is spread throughout these wandering beasts, a slightly larger portion of the mass is contained in the hot gas that spreads throughout the entirety of the cluster. The rest? It is dark matter, which is an invisible form of matter that makes up the bulk of the mass of the universe (scientists estimate that our universe consists of 4.9% ordinary matter, 26.8% dark matter and 68.3% dark energy).

Teams at NASA's Chandra X-ray Observatory and  the European Southern Observatory's Very Large Telescope were able to come up with an estimate for the cluster's mass based on data acquired from the motions of the galaxies inside the cluster, as well as data regarding the extreme temperature of the gas that exists in the regions between the galaxies. Researchers ultimately noticed that the cluster appeared as though it formed because of a "titanic collision" between a pair of galaxy clusters. "That's where the Hubble data came in," said Felipe Menanteau of the University of Illinois at Urbana-Champaign. Ultimately, because of the complicated merger state of this galaxy cluster, it threw the previous measurements into question.

"We were in dire need for an independent and more robust mass estimate given how extreme this cluster is and how rare its existence is in the current cosmological model. There was all this kinematic energy that could be unaccounted for [because it does not fit into Hubble's field of view] and could potentially suggest that we were actually underestimating the mass." Essentially, this mean that because of the "unaccounted energy" (which results from the fact that the merger is occurring tangentially to the observers' line of sight), in previous readings, scientists were potentially missing a good fraction of the kinetic energy of the merger because their spectroscopic measurements only track the radial speeds of the galaxies. This would ultimate result in underestimating the mass of the cluster.

And it seems that this is exactly what happened. In order to correct the estimate, the team used Hubble to measure the weak lensing (which occurs when gravity distorts space like a funhouse mirror and warps images of background galaxies). The greater the warping, the more mass is locked up in the cluster. "What I did is basically look at the shapes of the background galaxies that are farther away than the cluster itself," explained Jee. And as previously mentioned, the degree to which the mass of the El Gordo cluster warps space indicates that the mass is equal to 3 quadrillion suns.