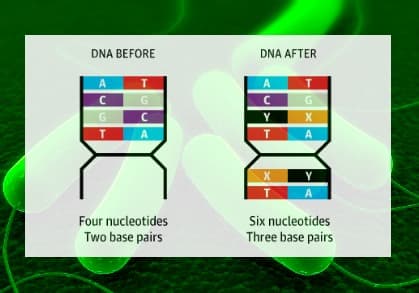 In a study published in Nature, scientists from the Scripps Research Institute in La Jolla, California announced that they engineered the first living microbe that has an expanded genetic code and is capable of passing this code down to future generations. This is a momentous breakthrough as, ever since life emerged on our little planet, the diversity of organisms has been limited to a base DNA code of four letters—G, T, C, and A. These are (or were) the molecules that produce all life on Earth by pairing up the DNA in the helix (they pair up as G-C and T-A, respectively). However, we've just had a game-changer, as scientists have introduced two new letters of life: X and Y.

Ultimately, along with paving the way for future synthetic organisms, a whole world of possibilities just opened up. The synthetic code in these organisms could be used to build biological circuits in cells or even to make cells that use DNA to manufacture proteins that are not known to exist in nature. However, the scientists in this study are specifically interested in the ways that these new organisms could be utilized to manufacture a wide assortment of protein-based drugs.

The team was led by Floyd Romesberg, and they used E. coli to insert a loop of genetic material that carried normal DNA and two synthetic DNA bases (which are known as X and Y, but whose real chemical names abbreviate to d5SICS and dNaM). The extra synthetic DNA forms a third base pair, X-Y. Amazingly, the E. coli was able to pass this new base pair on to subsequent generations, which is necessary in order to create any viable, useful synthetic organisms. However,before anyone gets concerned about an apocalyptic takeover, Romesberg asserts that the organisms that are carrying  his "unnatural" DNA code were created with a kind of built-in safety mechanism that ensures that the organisms do not escape and wreak havoc on the environment (not that they would wreak havoc on the environment or any living organisms if they did happen to escape). Ultimately, the modified bugs can only continue on if they are fed the chemicals that they need to replicate the synthetic DNA. If they lack a steady stream of these chemicals, then they are no longer able to produce the synthetic DNA, and so they cannot subsist.

This new creation also have far ranging implications on our understanding of life. Scripps notes, "For so long people have thought that DNA was the way it was because it had to be, that it was somehow the perfect molecule." Now we know that this is not true. As it turns out, DNA is far more dynamic than was previous anticipated. Consequently, if we were to restart Earth's evolutionary clock, an entirely different molecule could have emerged, which could result in an entirely different form of life. This makes it all the more likely that, if we ever discover life on other worlds, it will be nothing like our own. However, a lot more study will be required before we are able to truly determine what uses this organism could have and before we are able to develop a firm understanding of the diversity of life.