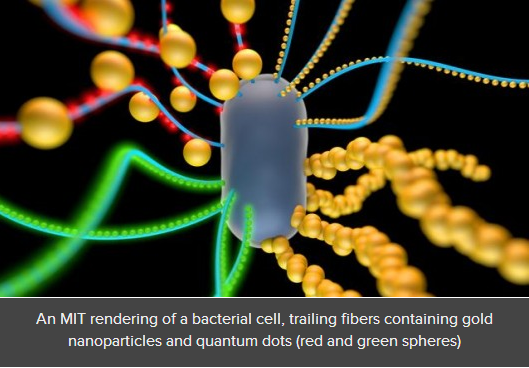 Scientists have spliced all kinds of material in order to produce new organisms and conduct experiments. For example, scientists at Duke University are currently using genetic modifications to combine polio with the common cold and create an organism that is able to combat brain cancer. As amazing as this sounds, there are other hybrids that are even more perplexing and astounding.

Case in point: At MIT, scientists recently announced that they developed a hybrid material that is a cross between living bacterial cells and non-living material (specifically, gold nanoparticles). Ultimately, the "living material" that results from this combination is able to respond to its environment just like a normal living cell; however, simultaneously, it can conduct electricity and emit light.

This process was started by Timothy Lu, assistant professor of electrical engineering and biological engineering. Lu began by taking E. colibacteria, which produces a protein structures known as "curli fibers," and adding peptides to the fibers. This process enables the fibers to bond with items (like the gold nanoparticles) that are introduced to the environment.Ultimately, these gold particle-covered fibers formed into rows of gold nanowires, that allowed the biofilm to conduct electricity.

The team explains the procedure, stating, "We interfaced curli fibrils with inorganic materials, such as gold nanoparticles (AuNPs) and quantum dots (QDs), and used these capabilities to create an environmentally responsive biofilm-based electrical switch, [and] produce goldnanowires and nanorods." Lu asserts,“It’s a really simple system, but what happens over time is you get curli that’s increasingly labeled by gold particles. It shows that indeed you can make cells that talk to each other and they can change the composition of the material over time."

In other strange news, read all about the time that scientist created life-like cells out of metal.