Scientists Assert That They Have Translated Primate Words into English 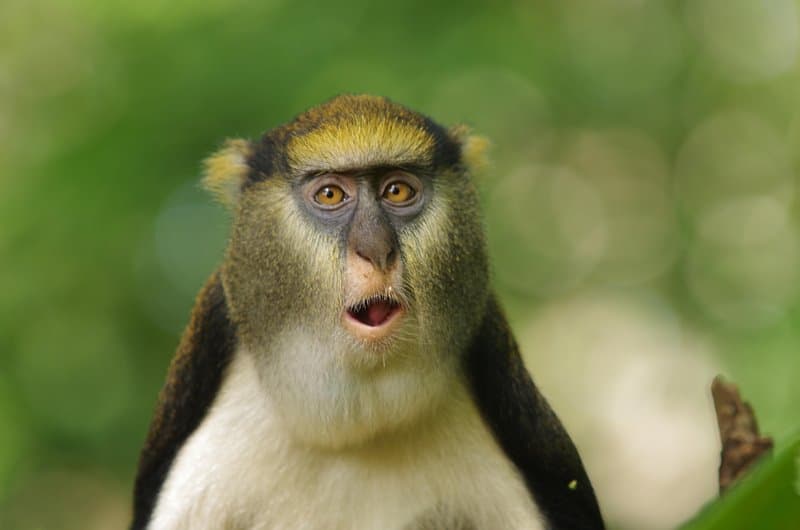 By now, saying that there is a lot that we don't know about the world has become old hat. We haven't explored some 95% of the ocean, the human mind seems infinitely complex, almost every day sees a plethora of new species being discovered...and our relationship to these other creatures leaves many scientists scratching their heads.

However, a team of scientists from France's National Centre for Scientific Research and New York University may have closed the gap a bit, allowing us a more comprehensive view of our world.

According to Philippe Schlenker, the lead author of the paper, the team has translated some specific aspects of primate speech into understandable English. Specifically, they found that Campbell's monkeys in the Ivory Coast’s Tai Forest use the term "krak" to indicate that a leopard is nearby, and “hok” to warn others that there’s an eagle circling overhead. Notably, the paper asserts that the primates use krak-oo and hok-oo to signify less serious ground and air threats. They also said boom when the coast was clear again. Conversely, on Sierra Leone's Tiwai Island, where there are no leopards, the word 'krak" loses this special significance. The same monkey species uses krak as a general alarm call for any threat, including eagles.

"Our findings show that Campbell's monkeys have a distinction between roots and suffixes, and that their combination allows the monkeys to describe both the nature of a threat and its degree of danger," the study's lead author, Philippe Schlenker, said in a press release.

However, it must be noted that this assumption rests on a foundation that needs a bit of bolstering. As Arik Kershenbaum, a zoologist at the National Institute for Mathematical and Biological Synthesis states, “Although this current work seems very internally consistent, it does rest on a shaky foundation of correlation. Without experimental confirmation the premise is highly speculative indeed.”

So let's take a moment to better understand the basis upon which the researchers make their assertion. In order to work out what was going on, the scientists played recordings of different types of threats (the sound of an eagle screeching or a leopard growling), and listened to the calls that resulted in the different locations. On the mainland, where the leopards are present, they found that the Campbell’s monkeys were using, what the team calls, a more specific dialect. This is the group that used krak when a leopard was nearby and hok when an eagle was close (and also the more specific krak-oo and hok-oo to signify less serious ground and air threats). But on the island, although the monkeys occasionally said hok when an eagle was nearby, they also said krak pretty generally across most threats.

While this difference is notable, we obviously can't ask the primates if our understanding of the word is correct, or if they are using the different terms for any specific reason. Thus, the team was forced to make logical inferences for the time being. And if the find is experimentally confirmed as being sound, it will be a notable step forward in understanding the brains and communication techniques of other species. Indeed, Schlenker now hopes that the research can be used to initiate the development of a form of "primate linguistics" - which would involve applying the sophisticated methods from human linguistics to animal communication.

“The important thing is that in this situation, both krak-oo and hok are more informative than krak,” Schlenker asserts. “By logic, if you hear krak you can infer there was a reason krak-oo and hok were not uttered, so you infer the negation." That is, when monkeys in the forest say krak, they are also implying not-hok and not-krak-oo, neither a minor threat nor an aerial threat. In this respect, the various terms have layers of meanings.

The results, which were published in Linguistics and Philosophy, suggest that some aspects of primate dialects are rather nuanced and sophisticated, much like human language.