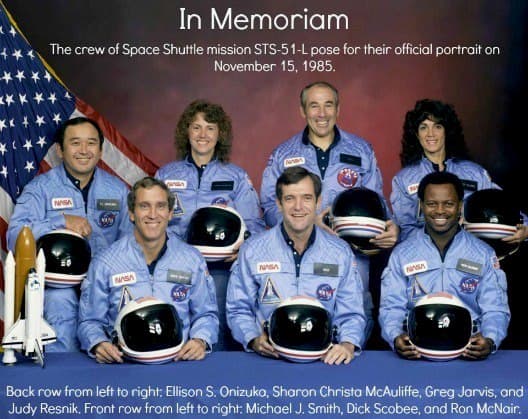 Around 11:30 am (EST) on the morning of January 28th 1986, Steven Virostek, along with his family and a camera, sat outside their home in Titusville, also known as 'Space City, USA,' which lies in very close proximity to the Kennedy Space Center (KSC). It was a familiar pattern for them, as Steven and his Wife, Hope, were both shuttle enthusiasts who had acquired a rather large collection of mission patches, corresponding to dozens of launches.

That winter morning was particularly cold, especially considering Florida is known for its rather balmy climate, which makes it an ideal location to serve as the headquarters for NASA's Space Shuttle program. At the start of the 5 minute video, the excitement of the group, who are bundled up in a thick layer of clothing, more appropriate for New England than Florida, was palatable. Both Hope and Steven can be heard cheering the shuttle on, as a thick smoke plume can be seen shooting straight up into the sky, aiming for the location in which the Earth ends and infinity begins. "What could possibly go wrong;" was likely a thought that crossed through the mind of the people at KSC, watching the launch.

Despite the Apollo 1 incident (years earlier) most civilians were under the impression that the shuttle launches were safe. After all, NASA wouldn't allow seven people to get on-board a rocket and light it on fire, where it would reach speeds exceeding Mach 1.92, unless all systems were a go, right? Unfortunately, this was not entirely true. There were several, bright, flashy red-flags dangling from a disco ball that were an indication that, at the very least, Challenger was not up entirely up to par.

But the launch had been delayed three times because of weather, putting pressure on NASA to give the green light to the crew. This mission was set to send the first civilian teacher into space, who would record two lessons from space, which were to be broadcast to millions of students across the US, garnering an unusual amount of press for such an event. Family members of teacher Christa McAuliffe, from New Hampshire, saw the whole thing unfold in front of them.

Challenger, and the seven people on-board on that fateful morning, never returned... or even left Earth, for that matter. Instead, the shuttle broke apart about 73 seconds into the launch sequence, with the fuel tank blowing up and the crew cabin, where the six astronauts and one teacher, eagerly awaited entering Low-Earth orbit -- crashed into the ocean floor. When the deaths of all seven people actually occurred is still open to speculation, but when the crew cabin was found lying on the bottom of the Atlantic Ocean, it was discovered that three of the four emergency air packs manually activated, which suggests that at least one of the crew members survived the initial blast without falling unconscious once the cabin decompressed. Regardless, the remnants of Challenger and the crew members fell about 65,000 feet from the sky, ultimately hitting the ocean at about 207 mph, killing anyone on board that may have been alive up until that moment.

Along with late astronauts Neil Armstrong and Sally Ride (both perished in 2012), One of the most brilliant minds in the physics community, Richard Feynman, was assigned to the grueling task of figuring out exactly what happened for Challenger to malfunction during the launch. All the while he was suffering from cancer. When the Rogers Commission report was released in June of 1986, Feynman refused to sign the report lest they choose not to include this quote, in regards to his frustration at how disconnected NASA engineers were from the management team: "For a successful technology, reality must take precedence over public relations, for nature cannot be fooled." NASA's own engineers estimated there was about a 1 in 100 chance of a malfunction, which is exponentially greater than the 1 in 100,000 figure that was used to recruit McAuliff into participating in the teacher-in-space program.

As for the content of the Rogers Commission Report, they found that Challenger's o-rings were less durable in cold weather, and the temperatures at Cape Canaveral that day was a chilly 36°F, or about 15°F cooler than any previous launch. To test the initial hypothesis, Feynman compressed a sample of the material that composed the two o-rings (used to separate and seal sections of Challenger's Rocket booster to keep propellant from leaking out) with clamps before proceeding to submerge the sample in ice-water; where he proved that the temperatures were too cold that day for them to work properly, causing the disaster.

More than 20 years later, the scope of both the Challenger and Columbia disasters can be felt amongst the populace, as our space program has long been one of the main reasons each of us are proud to be an American. Through that, looking at the risks some of these individuals were willing to take in the spirit of bettering our understanding of the universe, their sacrifices seem even more honorable.