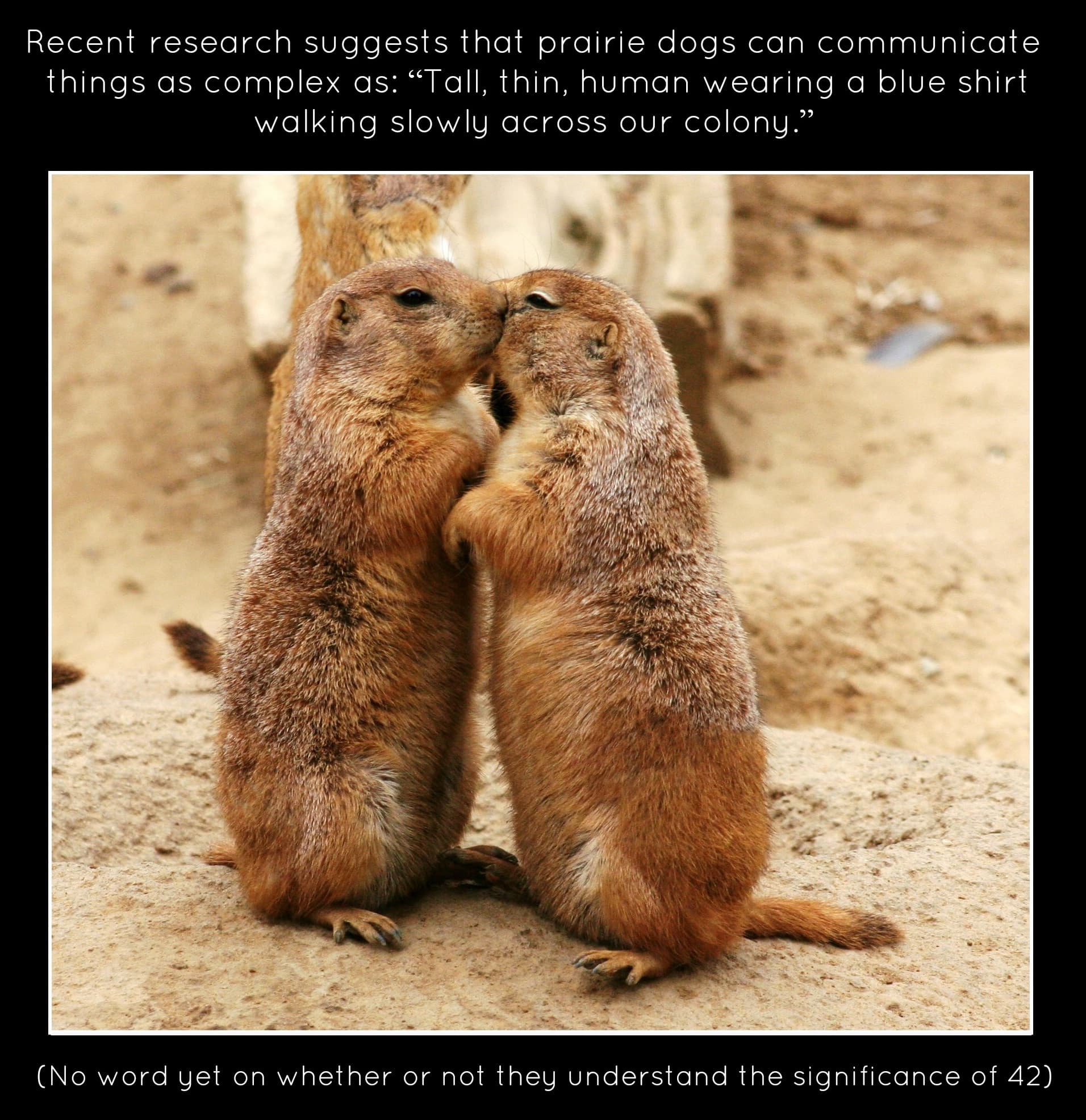 It seems these days, new evidence pointing to the intelligence of non-human species is abundant. This is interesting for several reasons. First, being that it goes against many long standing notions we have about our own self consciousness. Secondly, with it, comes an increasing number of questions. Like, "How intelligent is intelligent?" and "Does this intelligence come with any limitations, or are our minds the only true limitation in understanding our surroundings?" Regardless, some of the answers to those questions may not be within our considerable means of understanding. But still, if one needs to look at one example of the questions I'm speaking of, you need not look further than the following bit of interesting information about prairie dogs. First, some back story.

For many years now, biologists have been studying prairie dogs in their natural habitats, hoping to unravel characteristics about their interactions - particularly the language in which they communicate. Con Slobodchikoff, a biologists hails from at North Arizona University, has been in the game for about 30 years. He became interested in prairie dog language following the initial discovery of the alarm calls similar, ground-based species use to communicate threats to other members of their colony. For instance, squirrels. It was revealed several years ago that the species use different, distinct warnings to relay the type of threat other members of their colony may encounter (like flying predators and those that are on the ground).

According to Slobodchikoff himself, the animals were ideal test subjects due to the fact that not only are they a social species, but also because they tend to live in small communities, preferring a territory in which they are shielded from natural predators (they go to great lengths to avoid dangerous confrontations by building complex underground tunnels). So to get down to the bottom of the matter, he and his team trapped a colony of prairie dogs, painting distinct marks on each creature to make them identifiable.

After which, the team exposed the colony to various different predators, revealing that not only do they develop a unique call for each different threat, but that the calls are so distinct, that a human can typically learn each of them within two hours. The more detailed analysis of the recorded calls led Slobodchikoff to believe that the incredible creatures can differentiate between colors of clothing and the size and shape of the person wearing them. Amazingly, they were also able to convey the fact that one of the predators appeared with a gun.

Thanks to his work with the prairie dogs, Slobodchikoff has been at work developing a translation device that employs voice pattern recognition techniques with artificial intelligence. Perhaps someday, the technology might allow us to communicate with other species. He asked us to imagine a day in which your dog could bark in the device and have it say "I want to eat chicken tonight."

However, I do want to note that while the idea is incredibly cool, it's also pretty far flung from the type of communication seen with animals in the wild. Our pets are typically isolated from other members of their species, which would prevent them from picking up on the universal language of their species (if such languages exist). That, and the calls made by a certain colony may not follow a similar pattern to calls developed by other colonies. Meaning, from a skeptical viewpoint, the notion is kind of absurd. (Would we even like what we hear?) Still, the possibly is intriguing. As are the many implications that come with acknowledging the fact that humans and animals may not be so different after all. What do you think, FQTQ fans?