Prometheus: A Shepherd of Saturn 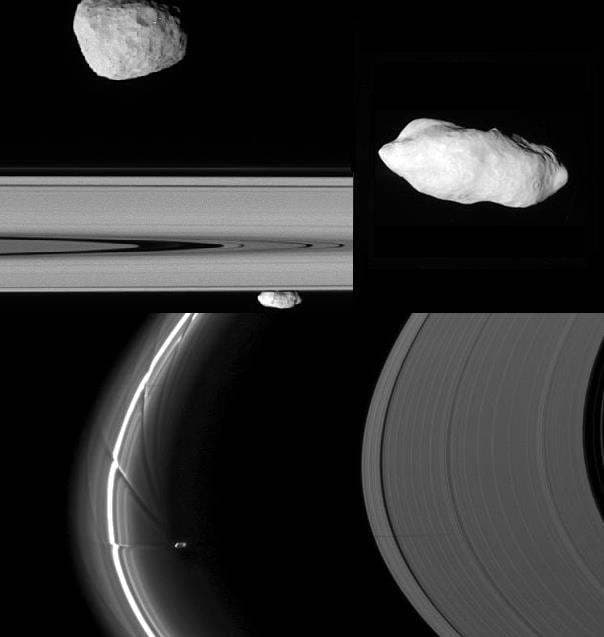 Prometheus was named after a Titan in Greek mythology that was known for his intelligence and resilience. He's considered somewhat of an ancient hero that enabled the progression of civilization when he stole heavenly fire for the use of mere mortals. As a consequence, Zeus sentenced him to the eternal torment of being bound to a rock where an eagle was sent to feed on his liver daily, only to have it grow back for repetitive punishment the follo[tumblrshare layout="1 or 2 or 3 or 4" ]wing day.

Prometheus (the moon) is one of the innermost satellites of Saturn and it orbits the gas-giant from about 86,565 miles (139,350 km) away. It was discovered in 1980 by the Voyager 1 probe that was sent to explore the outer solar system and the moons of the gas-giants before being sent on a journey into interstellar space. Unlike most of Saturn's moons, Prometheus is extremely elongated in shape and with an approximate diameter of 53.4 miles (86 km), it's one of the smallest natural satellites in our solar system.

Along with Pandora, Prometheus acts as a Shepard moon for Saturn's famous F-ring. When I say they act as Shepard, I mean the moons (particularly Prometheus) introduces a line of particles that links the ring to the satellite. Together, the gravitational interaction of both moons perturbs the ice and rock material that compose the F-ring. As Prometheus approaches and recedes, it draws out material that causes the ring to thin out.

This is a video of Prometheus interacting with Saturn's rings that was shot by the Cassini space probe.