The Most Powerful Superflare of All Time Spotted Nearby 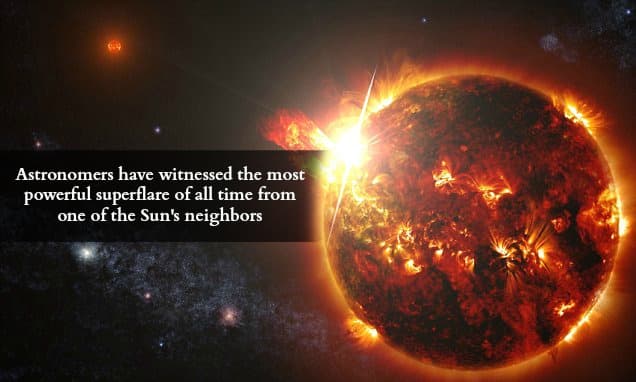 Our local star is a boiling pit of plasma that accounts for more than 99% of the total mass of our solar system. That doesn't even touch base on how large it is. To offer some perspective, Earth is situated some 92,960,000 miles (149,600,000 km) from Sol, yet our blue marble is technically tucked within the outer rim of the Sun's atmosphere. As such, we see many incredible solar storms that put on dazzling light displays, but because of our proximity to the Sun's surface (where the action happens) and our atmosphere and magnetic field  we are protected from most of the potentially damaging side-effects of solar activities. However, that's not to say they are without complications. For instance, a powerful solar flare has the ability to cripple our communication systems. Imagine the havoc one a 100 times more powerful could wreak...

Thankfully, we'll probably never know the answer to that question, but it's worth mentioning given a new discovery. In a solar storm to beat all solar storms, astronomers have detected a "super"flare that's more than 10,000 stronger than the most powerful flare on record. The events that followed happen to be the longest duration of any solar storm ever witnessed.

A Small Star With A Large Appetite:

The star itself — a red dwarf (stars of this classification tend to be small, dim and rather unremarkable), called DG Canum Venaticorum (also known as DG CVn for short), that is locked in a tight orbit with another red dwarf companion — is essentially in our solar neighborhood, lurking just 60 light-years away from Earth.

At approximately 5:07 p.m. EDT on April 23 of 2014, an unusually high amount of x-ray radiation was seen in the vicinity of this system by Swift's "Burst Alert Telescope" (it also noted that its brightness at other wavelengths increased by a factor of 10 and 100 respectively), which prompted astronomers to take a closer look using various infrared and ultraviolet gathering tools and ground-based observatories. Sure enough, not long after, another equally impressive superflare was spotted (with less powerful aftershocks, perhaps even 7 of them, happening over 11 days).

"For about three minutes after the BAT trigger, the superflare's X-ray brightness was greater than the combined luminosity of both stars at all wavelengths under normal conditions,'"remarked Adam Kowalski: the scientist tasked with making sense of the data. "Flares this large from red dwarfs are exceedingly rare," he finished.

"We used to think major flaring episodes from red dwarfs lasted no more than a day, but Swift detected at least seven powerful eruptions over a period of about two weeks," said Stephen Drake, another astrophysicist from NASA's Goddard Space Flight Center. He spearheaded the presentation during a meeting of the American Astronomical Society's High Energy Astrophysics Division in August.

Once it reached the climactic point, the flare's temperature peaked at 360 million degrees Fahrenheit (200 million Celsius), which is approximately 12 times hotter than the temperatures found within the Sun's core

Despite the fact that DG CVn has less than a third of the Sun's mass , it is still very energetic. Red dwarfs are known to have deeper-than-average convection zones, which help drive hot, gaseous bubbles to the solar surface. Additionally, they also have exponentially more powerful magnetic fields (bad news for orbiting planets). This, in turn, leads to an increase in the frequency and the strength of solar flares (solar activity is driven by disruptions in magnetic fields, which stem from a phenomenon called magnetic reconnection).

NASA went on to clarify that they are unsure of which star the eruptions came from. It was difficult to discern between the two given how close the pair are (they are separated by just 3 AU, or three times the distance between Earth and the Sun). Furthermore, as Rachel Osten — an astronomer at the Space Telescope Science Institute (STSI) —put it: "This system is poorly studied because it wasn't on our watch list of stars capable of producing large flares." "We had no idea DG CVn had this in it."

Additionally, astronomers calculate that the star is just 30 million years 0ld (about 0.7% of our s0lar system's age). Studying this system could give us invaluable insight into the behavior of young dwarf stars.

As a final note, "The flare on DG CVn, if viewed from a planet the same distance as Earth is from the sun, would have been roughly 10,000 times greater than this, with a rating of about X 100,000." "Greater than this" refers to the most powerful solar outburst on record, a class x 45 solar flare that was documented in November of 2003