This could be the key to safer clinical drug trials and organ repair (or even replacement).

/ Person On A Chip

A powerful new platform developed by researchers at U of T Engineering, called AngioChip, is now capable of growing realistic human tissues outside of the body. The study sought to find a way to grow human tissues in a lab setting, but within conditions that mirror the human body.

“It’s a fully three-dimensional structure complete with internal blood vessels,” says Professor Milica Radisic (IBBME, ChemE). “It behaves just like vasculature, and around it there is a lattice for other cells to attach and grow.”

Their study was published recently in Nature Materials.

To create the scaffold, the team used a polymer called POMaC, that is biodegradable and biocompatible. It is created out of a series of thin layers that resemble computer microchips, following a pattern of channels about 50-100 micrometers wide. These are then stacked to create a 3D structure that serve as synthetic blood vessels. With each layer, UV light serves as the bond that cross links the polymer.

Once the structure is constructed, it is then coated in liquid that has living cells, allowing it to attach to the channels and grow as they would if it were inside a human body. 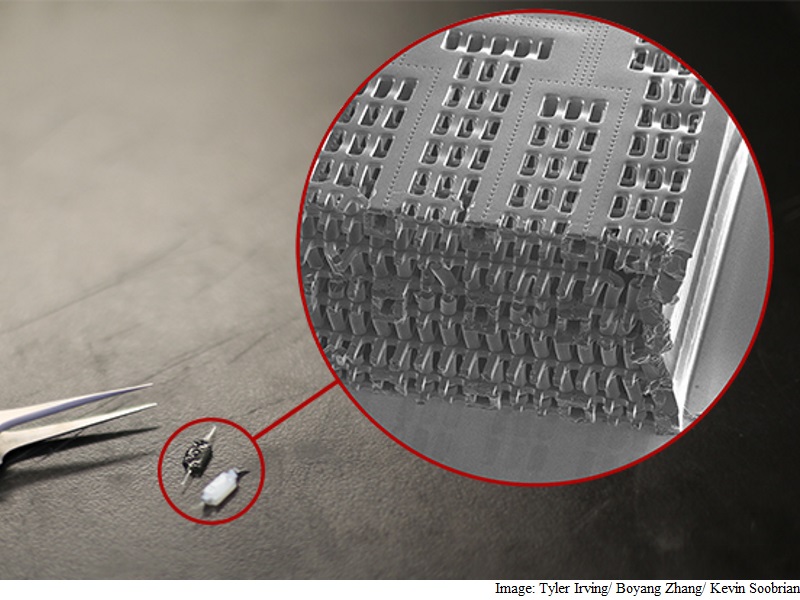 “Previously, people could only do this using devices that squish the cells between sheets of silicone and glass,” says Radisic. “You needed several pumps and vacuum lines to run just one chip. Our system runs in a normal cell culture dish, and there are no pumps; we use pressure heads to perfuse media through the vasculature. The wells are open, so you can easily access the tissue.”

In terms of application, AngioChip presents a lot of potential for pharmaceutical testing. Current testing methods, which use animals or humans in controlled clinical trials, are not only costly but raise a lot of ethical questions. Lab-grown human tissues, however, provide a realistic model that could lower risk and provide valuable data at a fraction of the cost.

With AngioChip, testing could allow for the detection of possible side effects as the drug interacts between the different organs.

Yet, the study is still very much in the early stages—but the team behind it is optimistic that it could also one day help save lives, as the technology could also make organ repair and replacement easier and more accessible.

/ Person On A Chip

Right Now, You Can Get This Game-Changing Workout App for 50% Off