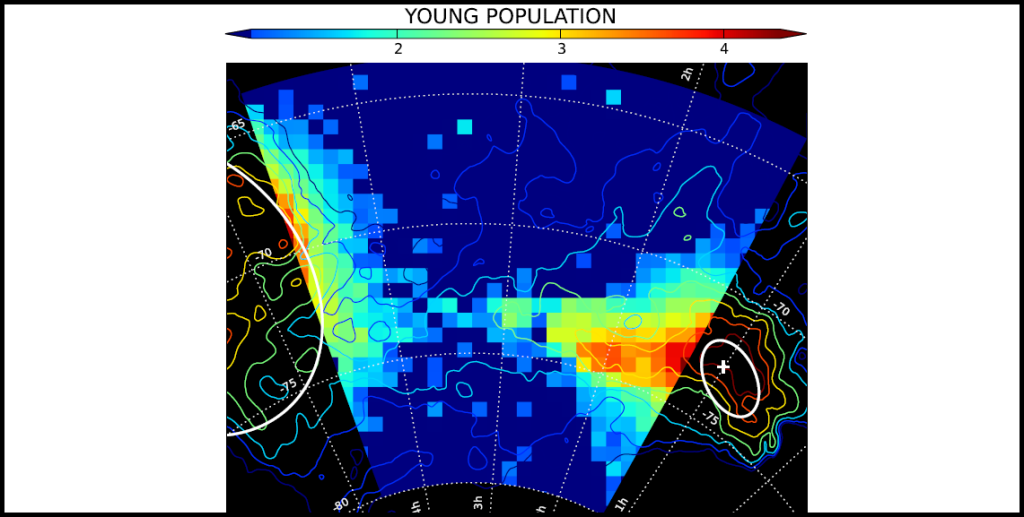 Polish astronomers from the Optical Gravitational Lensing Experiment (OGLE) have discovered a young stellar bridge that forms a continuous connection between the Magellanic Clouds. This finding is based on number density maps for stellar populations found in data gathered by OGLE. This is the most extensive optical survey of this region up to date. The researchers write in a paper published on Oct. 1:

We find that the young population is present mainly in the western half of the Magellanic Bridge area (MBR), which, together with the newly discovered young population in the eastern Bridge, form a continuous stream of stars connecting both galaxies along. The young population distribution is clumped, with one of the major densities close to the Small Magellanic Cloud (SMC), and the other, fairly isolated and located approximately midway between the Clouds, which we call the OGLE island.

The Magellanic Clouds are comprised of two galaxies: the Large (LMC) and the Small Magellanic Cloud and are the closest pair of interacting galaxies. to the Milky Way. The Clouds have always been of special interest to astronomers, and they continue to play a significant role in our understanding of the Universe.
For the observations, the team used the 1.3 m Warsaw telescope located at the Las Campanas Observatory in Chile (operated by the Carnegie Institution for Science) equipped with the 256 Megapixel 32-chip mosaic camera. The OGLE project started regular observations in 1992 as one of the first generation microlensing projects dedicated to detecting and characterizing microlensing events. During its over 20 year history OGLE gradually evolved and conducted numerous projects that contributed to many fields of modern astrophysics. The current, fourth phase of the OGLE survey (OGLE-IV) started in March 2010 and the Galactic bulge and disk, the Magellanic Clouds, and the Magellanic Bridge, including vast areas around them, are the primary observing targets for this phase.
In the paper, OGLE scientists present density maps of stellar populations in the entire Magellanic Bridge region, thanks to the unprecedented OGLE-IV coverage. The maps show, for the first time, the detailed extent of these populations, which should provide valuable input information for models of past Milky Way and Magellanic Clouds interactions. “This unique dataset allowed us to construct detailed number density maps for three key stellar populations: the young stars, and the intermediate-age and old populations, represented by the red clump and the red giant branch stars,” the researchers reveal.
The density map confirms that the majority of young stars are found in the western part of the classical Bridge, but what is more important, shows that the young population is also present in the eastern part of the classical Bridge region, which was not observed before. “This means that there is a continuous stream of young stars connecting the two galaxies,” the team concludes.
Presented number density maps form a first uniform dataset on stellar populations in the area between the Magellanic Clouds, much larger than the classical Magellanic Bridge. This is a unique database that may be used for testing models and simulations of past interaction between the Magellanic Clouds and the Milky Way.
Data used to make these density maps are available in an electronic form from the OGLE Internet archive.

This article originally appeared on AstroWatch. Republished with permission.