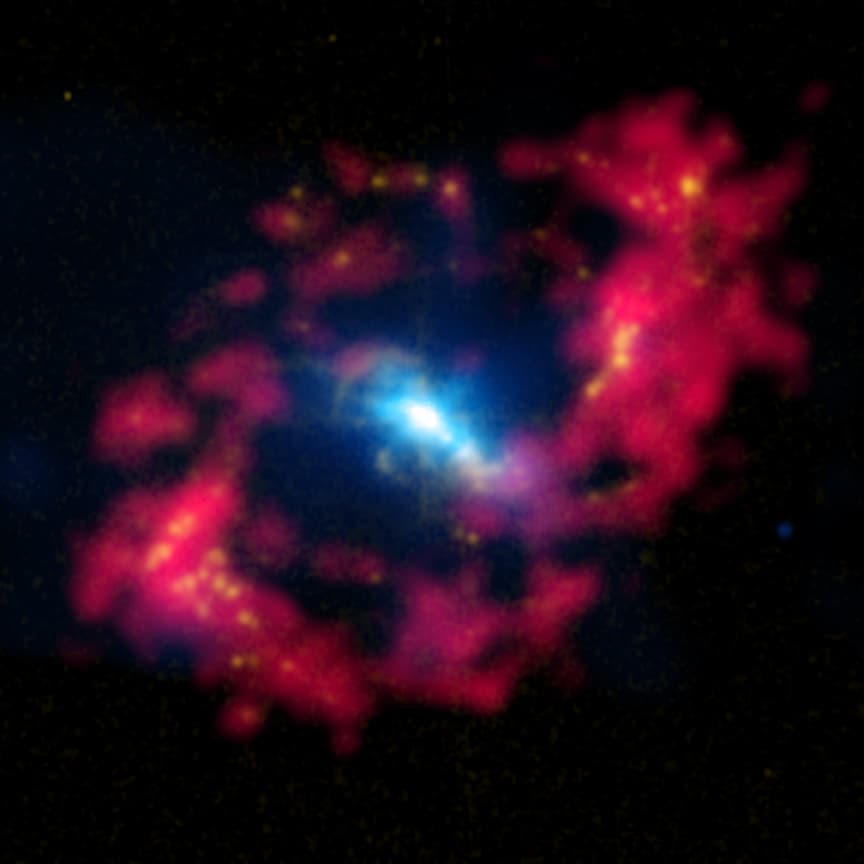 A team of scientists, led by Dr. Sebastian Hoenig from the University of Southampton, has accurately measured the distance to the nearby NGC 4151 galaxy, using the W. M. Keck Observatory Interferometer. The team employed a new technique they developed, which allows them to measure precise distances to galaxies tens of millions of light-years away. The research was published earlier this week in the journal Nature.

The new technique is similar to that used by land surveyors on Earth, who measure both the physical and angular — or ‘apparent’ — size of a distant object, to calculate its distance from Earth.

The galaxy NGC 4151 is dubbed the ‘Eye of Sauron’ by astronomers for the similarity to its namesake in the film trilogy The Lord of the Rings. As in the famous saga, a ring plays a crucial role in this new measurement. All big galaxies in the universe host a supermassive black hole in their center and in about 10 percent of all galaxies, these supermassive black holes are growing by swallowing huge amounts of gas and dust from their surrounding environments. In this process, the material heats up and becomes very bright — becoming the most energetic sources of emission in the universe known as active galactic nuclei (AGN).

This hot dust forms a ring around the supermassive black hole and emits infrared radiation, which the researchers used as the ruler. However, the apparent size of the Eye of Sauron’s ring is so small, the observations were carried out using the Keck Interferometer, which combines Keck Observatory’s twin 10-meter telescopes — already the largest telescopes on Earth — to achieve the resolving power of an 85-meter telescope.

To measure the physical size of the dusty ring, the researchers measured the time delay between the emission of light from close to the black hole and the more distant infrared emission. The distance from the center of the galaxy to the hot dust is simply this delay divided by the speed of light.

By combining the physical size of the dust ring with the apparent size measured with the Keck Interferometer, the researchers were able to determine a distance to NGC 4151.

“One of the key findings is that the distance determined in this new fashion is quite precise — with 90 percent accuracy,” Hoenig said. “In fact, this method, based on simple geometrical principles, gives the most precise distances for remote galaxies. Moreover, it can be readily used on many more sources than current methods. Such distances are key in pinning down the cosmological parameters that characterize our universe or in accurately measuring black hole masses. Indeed, NGC 4151 is a key to calibrating various techniques of estimating black hole masses. Our new distance implies that these masses may have been systematically underestimated by 40 percent.”

Hoenig, together with colleagues in Denmark and Japan, is currently setting up a new program to extend their work to many more AGN. The goal is to establish precise distances to a dozen galaxies using this technique and use them to constrain cosmological parameters to within few percent. Combined with other measurements, this will provide a better understanding of the history of expansion of our universe.

Notice: This is a press release from Keck Observatory. See the original here.