A New Theory on the Formation of Retrograde Globular Clusters 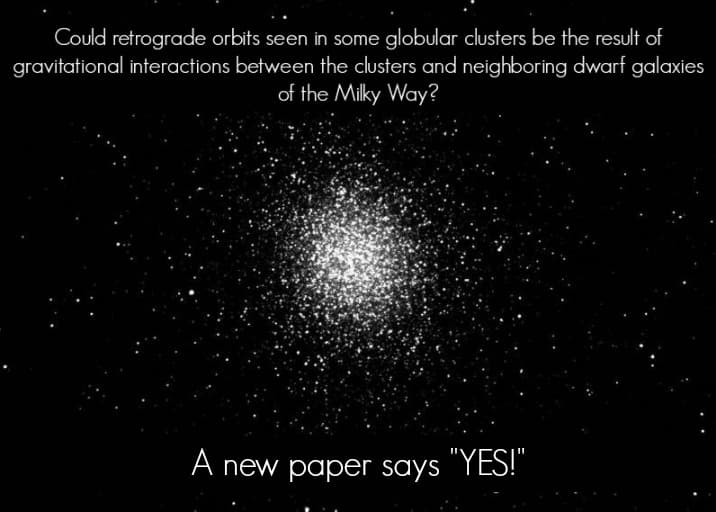 The conservation of angular momentum is one of the reigning kings of the universe. For starters, let's take the Solar System as an example. The Sun rotates in a particular direction, and all of the planets, (most) asteroids, rocks, and nearly everything else in the Solar System travels (orbits) in the same direction. The only exceptions to this are some comets and a few asteroids, which are thought to be burnt out comets. Not only does nearly everything orbit in the same direction, the bodies all orbit more or less around the equator of the Sun (within some degree of variance). Furthermore, most of the planets rotate in the same direction as the Sun! Venus and Uranus are the two exceptions, likely due to incredibly violent impacts billions of years ago.

Turns out this chaotic universe does have some measure of beautiful order. An example of this can been seen in the Jovian system and its many, many moons. Most of the inner moons have prograde orbits, meaning that they orbit in the same direction as their parent planet's rotation. Jupiter's more distant moons, however, tend to have retrograde orbits, meaning that they orbit in the opposite direction from Jupiter's rotation. In the case of Jupiter and its moons, it is reasonable to assume that every retrograde moon has been captured and is not a natural satellite. When natural moons form around a planet, they form out of the same regions as their parent planet; this is also true when planets form around their host star.

What about the Milky Way and its globular cluster (GC) system? Of the ~150 globular clusters that have been discovered in the Milky Way, 33 have been confirmed to have a prograde orbit around the galaxy, while 15 have been confirmed to have a retrograde orbit. Not enough data has yet been obtained to constrain the rest of them. Right now, we don't have a solid enough understanding to give a definite answer as to what came from where. There is still so much for us to learn about the evolution of galaxies in the early universe through to today.

Up to this point, some or even many of you may assume that the retrograde globular clusters must have been captured. We know that the Milky Way has been through mergers in the past. The Milky Way has almost finished "eating" the Sagittarius Dwarf Galaxy and has both the Small and Large Magellanic Clouds in its sight. The retrograde globular clusters could definitely have come from galactic mergers—we know at least some of the clusters originated that way.

A study has recently come out of the Southern Federal University in Rostov-on-Don, Russia, pointing to a new potential birthplace for some of these retrograde globular clusters. Victoria Yankelevich has shown that over a few billion years, prograde clusters gravitationally interacting with the Magellanic Dwarf Galaxies, can change GCs' orbits from prograde to retrograde as they lose angular momentum. I personally find this fascinating! It is not a problem we'll ever have to worry about with Jupiter or the Solar System in general, though. We're lucky that the Earth isn't going to change on us.

WHAT IT MEANS FOR US:

So you might be wondering why this is potentially important. It's all about understanding how the Milky Way formed. We cannot view the formation of our galaxy since it happened a long time ago, so the only way we can form a clearer understanding of its origins is by studying the galaxy itself. We know that a large number of the Milky Way's globular clusters have been captured, but which ones? How does their chemical make up differ from clusters that formed in the Milky Way? These are the questions that are still yet to be answered.