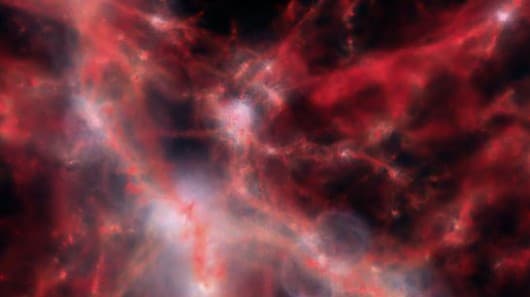 An international team of astronomers, based at the Universities of Leiden in the Netherlands and Durham in the UK and, led by professor Joop Schaye (Leiden University), developed a simulation of the universe in which realistic galaxies are created; their mass, size and age are similar to those of observed galaxies. Their similarity is caused by the simulation of strong galactic winds — gas winds that are blown from galaxies.

The simulations took several months to run at the "Cosmology Machine" in Durham and at "Curie" in Paris, among the largest computers used for scientific research in the U.K. and France, respectively. Astronomers can now use the results to study the development of galaxies from almost 14 billion years ago until now. The results will be published in Monthly Notices of the Royal Astronomical Society on 1 January.

For years, astronomers have studied the formation of galaxies using computer simulations, but with limited success. The galaxies that formed in previous simulations were often too massive, too small, too old and too spherical.

The galaxies formed in the EAGLE-simulation (Evolution and Assembly of GaLaxies and their Environments) are a much closer reflection of real galaxies thanks to the strong galactic winds, which blow away the gas supply needed for the formation of stars. EAGLE's galaxies are lighter and younger because fewer stars form and they form later. In the EAGLE simulation these galactic winds — which are powered by stars, supernova explosions and supermassive black holes — are stronger than in earlier simulations.

The sizes and shapes of the thousands of galaxies that form in the EAGLE simulation are also similar to those of galaxies that astronomers observe in the Universe. "The universe generated by the computer is just like the real thing. There are galaxies everywhere, with all the shapes, sizes and colours I've seen with the world's largest telescopes. It is incredible. In the EAGLE universe I can even press a button to make time run backwards," says coauthor Richard Bower from Durham University.

Having developed a simulation which produces galaxies with characteristics similar to observed galaxies, astronomers can now study the evolution of individual galaxies in detail. "This is the start of a new era for us," says co-author Rob Crain from Liverpool John Moores University. "We can now manipulate the conditions of the Universe and study the evolution of galaxies throughout the past 14 billion years."

(From The Netherlands Research School for Astronomy)