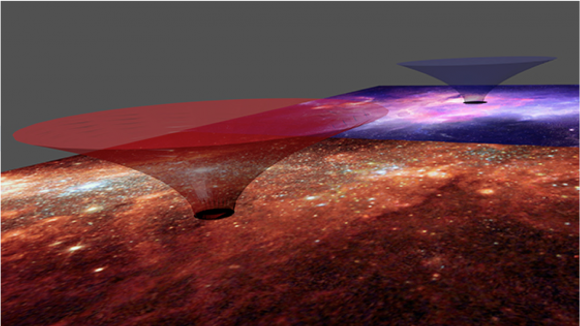 Our very own Milky Way could be home to a giant tunnel in spacetime.

At least, that’s what the authors of a new study have proposed. According to the team, a collaboration between Indian, Italian, and North American researchers at the International School for Advanced Studies (SISSA) in Italy, the central halo of our galaxy may harbor enough dark matter to support the creation and sustenance of a “stable and navigable” shortcut to a distant region of spacetime – a phenomenon known as a wormhole. The team’s research was published in the November 2014 issue of Annals of Physics. A pre-print of the paper is available here.

Wormholes were first conceptualized by Albert Einstein and Nathan Rosen in 1935. Far from being fodder for science fiction, the two scientists instead proposed their idea as a way to get around the idea of black hole singularities. Rather than creating a knot of infinite density, Einstein and Rosen thought, the hefty energy inherent in such a massive body would distort spacetime to such an extent that it bent over on itself, allowing a bridge to form between two distant areas of the Universe. Alas, these wormholes would be extremely unstable and would require enormous amounts of “negative energy” to remain open.

But according to the team at SISSA, large amounts of dark matter could provide this fuel. Using a model of dark matter’s abundance that is based on the rotation curves of other spiral galaxies, the researchers found that the distribution of dark matter in the Milky Way produced solutions in general relativity that would, theoretically, allow a stable wormhole to arise.

Paulo Salucci, an astrophysicist on the the team from SISSA, explained: “If we combine the map of the dark matter in the Milky Way with the most recent Big Bang model to explain the universe and we hypothesise the existence of space-time tunnels, what we get is that our galaxy could really contain one of these tunnels, and that the tunnel could even be the size of the galaxy itself.” He continued, “But there’s more. We could even travel through this tunnel, since, based on our calculations, it could be navigable. Just like the one we’ve all seen in the recent film Interstellar.”

Of course, Salucci and the other researchers were working on this project long before Interstellar was released, but their result does lend some theoretical support to the ideas in the film – ideas that were also fact-tested and revised by physics guru Kip Thorne of Caltech.

The authors believe that their result reinforces the importance of discerning the true nature of dark matter. According to Salucci, “Dark matter may be ‘another dimension’, perhaps even a major galactic transport system. In any case, we really need to start asking ourselves what it is."

It is important to understand that this is purely a mathematical result. Indeed, such a wormhole may be theroretically possible… but that doesn’t mean it’s probable. Salucci ventured, “Obviously we’re not claiming that our galaxy is definitely a wormhole, but simply that, according to theoretical models, this hypothesis is a possibility.”

The researchers went on to explain that their idea could be tested experimentally by comparing our own Milky Way, a spiral galaxy, with a nearby galaxy of a different type. By comparing the dark matter distributions between the two galaxies, scientists would potentially be able to use general relativity to probe differences in their spacetime dynamics.

Realistically, the technology that would allow researchers to do that is a long way off. But never fear, science (and scifi) fans – you can still check out the team’s wormhole simulation in the animation below, watch the movie if you haven’t already, and/or get your hands on a copy of Kip Thorne’s book, The Science of Interstellar.