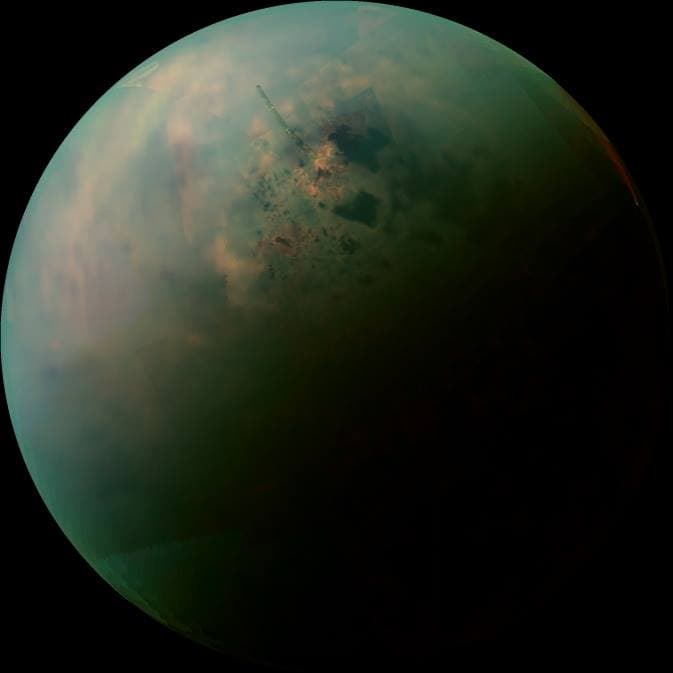 Titan - the Saturnian moon - is never lacking in awesomeness (something we have reiterated time and time again). This newly-released image only scratches the surface of the moon's awesomeness. As you can see, NASA'S Cassini-Huygens probe recently took a look at the free-standing bodies of liquid  that set Titan apart from the pack. Ultimately, these images of Titan's lakes and oceans proved that this moon is the only other world in our solar system that is similar to Earth in this regard.

However, the word "similar" is rather misleading. Yes, Titan has liquid oceans, shorelines, lakes, rivers, rain and even seasons, but unlike Earth (where you can safely get a little dew on your shoe, or catch a few drops of rain in your mouth), on Titan, too much "rain" could easily wind up poisoning you (or turning you into a fire breathing dragon, provided you had some oxygen and a match). This is because Titan's rain is made up of liquid hydrocarbons (a huge component of gasoline).

Regardless, since Titan's dense atmosphere is opaque to light at optical wavelengths, special tools are needed to peer  through the atmosphere to get a good look at the surface. Because of this, we didn't know the extent to which Titan is like Earth until Cassini arrived. Now, thanks to its keen eye (and high tech camera), we have yet another image of the changing tides.

In this particular image (seen up top), we see the Kraken Mare region of Titan. Not only is it Titan's largest sea, but it's also roughly the same size as Lake Superior and the Caspian Sea combined. Located nearby, we see Ligeia Mare (also one of Titan's largest bodies of liquid). The area that looks similar to a foam finger is Punga Mare - with various other small lakes close by. The image was made possible because, during the time in which the image was taken, the probe's position allowed it to witness  the moment that Titan's winter darkness subsided - bringing summer for the first time in 8 years when the hazy clouds (pictured on the left) finally  dissipated.

Each pixel is representative of 2 miles (3 km) of Titanian surface.