New Discoveries in the Fight Against Cancer: 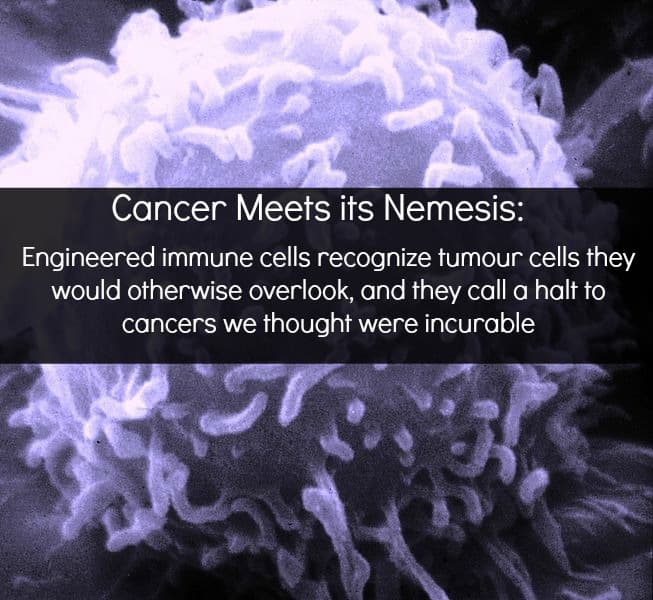 Cancer has been plaguing humanity for years, but each year brings us closer to finding a cure. Even if we aren’t developing drugs to combat the disease, we are coming to a better understanding of how the disease operates. But the newest findings have brought more than a better understanding. In one of the most amazing advances in the fight against leukemia and other blood cancers in many years, doctors are using gene therapy to transform patients' blood cells into soldiers that seek and destroy cancer.

There are at least six research groups that have treated more than 120 patients (who have varying types of blood and bone marrow cancers), and these groups have experienced stunning results. In one study, all five adults and 19 of 22 children with acute lymphocytic leukemia (ALL) had a complete remission. All of these individuals were gravely ill patients who had no other treatment options. Many had tried multiple bone marrow transplants, and some had 10 types of chemotherapy. In one research group, one person's tumors disappeared in just eight days.

Although a few of the patients have experienced relapse, it is nonetheless an inspirational advancement—it provides a new option to many who had run out of places to turn, and researches hope to have federal approval for the treatment as early as 2016. This also brings new hope for the future—hope that is much needed in light of harrowing statistics. Nearly 49,000 new cases of leukemia, 70,000 cases of non-Hodgkin lymphoma, and 22,000 cases of myeloma are expected to be diagnosed in the United States in 2013.

Until now, the most common methods of combating cancer involved harsh drugs or radiation. Using either of these causes major side effects. The new treatment requires that the patient’s blood be filtered in order to remove millions of T-cells, and then altering them to contain a gene that targets cancer. Next, the T-cells are returned to the patient over the course of three days. This method (unlike radiation) leaves the healthy cells relatively unharmed.

Unfortunately, the gene therapy must be made individually for each patient, and lab costs alone are about $25,000; however, that cost is still less than many of the other drugs that are used to treat these diseases. Additionally, it costs far less than a transplant.

And there are other advancements, new research suggests that a component that is found in grape seed extract is effective in killing prostate cancer cells. The investigators say that their findings mean they are a step closer to understanding the possible effects and mechanisms of active components in GSEs that are effective against cancer cells.