This could explain the abundance of positrons near Earth. 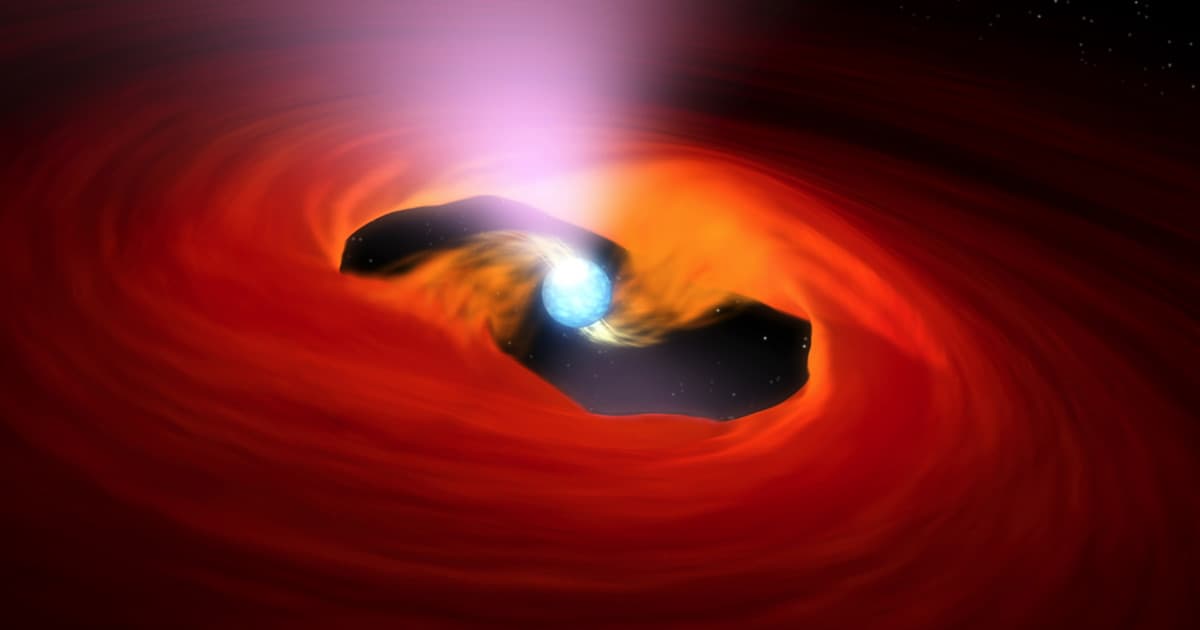 Antimatter, the opposite of matter on the sub-atomic scale, has been puzzling scientists for almost a century. Its nature and the way it interacts with other types of matter remains largely unknown, despite decades of research, most notably by the European Organization for Nuclear Research (CERN) using the massive Large Hadron Collider.

About a decade ago, astronomers discovered that positrons, the antimatter version of electrons, were inexplicable abundant near Earth — and a newly discovered cosmic structure could finally help explain why.

On Tuesday, NASA researchers published a new study in the journal Physical Review D. It details their discovery of a faint, but gigantic glow of high-energy light surrounding a pulsar — a type of neutron star — close to Earth using NASA’s Fermi Gamma-ray Space Telescope.

The neutron star’s halo-shaped glow is so huge and close to us that it would appear 40 times bigger than a full Moon in the night sky — about the size of the Big Dipper — if we were able to see it with the naked eye.

The gamma-ray glow (electromagnetic radiation arising from decaying atomic nuclei) emanating from the neutron star dubbed “Geminga” was first spotted in 1972 and was found to exist some 800 light-years away in the Gemini constellation.

Only now have scientists been able to isolate signals emanating from the star itself, though, separating its gamma rays from the abundant diffused light rays caused by particles bouncing off of the starlight surrounding it.

That allowed them to see the halo and determine that Geminga could be responsible for upwards of 20 percent of the positrons detected near Earth.

“Our work demonstrates the importance of studying individual sources to predict how they contribute to cosmic rays,” researcher Mattia Di Mauro said in a press release. “This is one aspect of the exciting new field called multimessenger astronomy, where we study the universe using multiple signals, like cosmic rays, in addition to light.”

More on neutron stars: Stare Into the Brutal Maw of This Barbarous Neutron Star

Read This Next
Ayy Lmao
Scientists Puzzled by “Spooky” Object Sending Radio Signals Every 18 Minutes From Deep Space
Spider Stars
Astronomers Discover “Spider Stars” That Tear Apart Other Stars
BUUURP
Astronomers Pinpoint Source of Mysterious Radio Burst Signal
Born in the 80s
Astronomers May Have Found a Star That’s Just 33 Years Old
Not a Neutron Star, Not Yet a Black Hole
Astronomers May Have Discovered First-Ever “Black Neutron Star”
More on Hard Science
Gremlins
8:57 PM on the byte
Scientists Gene Hack Hamsters Into Hyper-Aggressive Monsters
Magic Crystals
Yesterday on the byte
Scientists Say Organisms Trapped in This Ancient Rock May Still Be Alive
Walled Up
May 12 on futurism
Scientists Say Space Is Filled With Invisible Walls
READ MORE STORIES ABOUT / Hard Science
Keep up.
Subscribe to our daily newsletter to keep in touch with the subjects shaping our future.
+Social+Newsletter
TopicsAbout UsContact Us
Copyright ©, Camden Media Inc All Rights Reserved. See our User Agreement, Privacy Policy and Data Use Policy. The material on this site may not be reproduced, distributed, transmitted, cached or otherwise used, except with prior written permission of Futurism. Fonts by Typekit and Monotype.