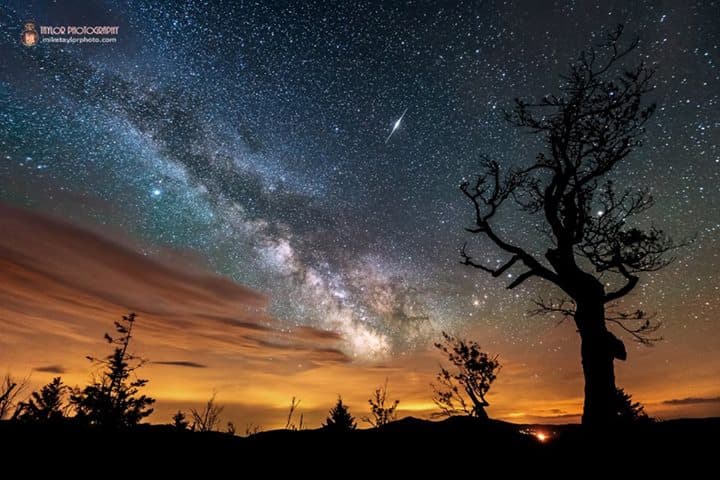 This is another incredible photograph taken by Mike at Taylor Photography. There are a few interesting things happening in this picture (titled: "Nature & Man: Iridium Flare, Milky Way, Clouds and Light Pollution").

First, the clouds help to reflect the light pollution coming from Farmington, Maine. Here at FQTQ, we've written several articles on light pollution, how it affects our health, the environment, how it wastes energy, and ways we can fight back and cut light pollution, so we'll just say it's not a good thing. Though the light pollution is the most prevalent man-made feature in this picture, the "meteor"  near the center of the image isn't really a meteor at all. It's an Iridium flare.

An Iridium flare is created by satellites with reflective surfaces. There are two types of Iridium flares. More properly, an Iridium flare is caused by a specific type of communications satellite. Here, sunlight is reflected off the antennae of these orbiting devices. The antennae are covered in a silver material that acts like a (near) perfect mirror. The satellites were launched by the Iridium Corporation in 1998, which is where the flare get its name. (For those interested, there are 72 of these satellites in a near-polar orbit).

The other type of Iridium flare is generated by a reflective surface of a satellite (most commonly, solar panels). Even though they aren't caused by an Iridium satellite, the name stuck.