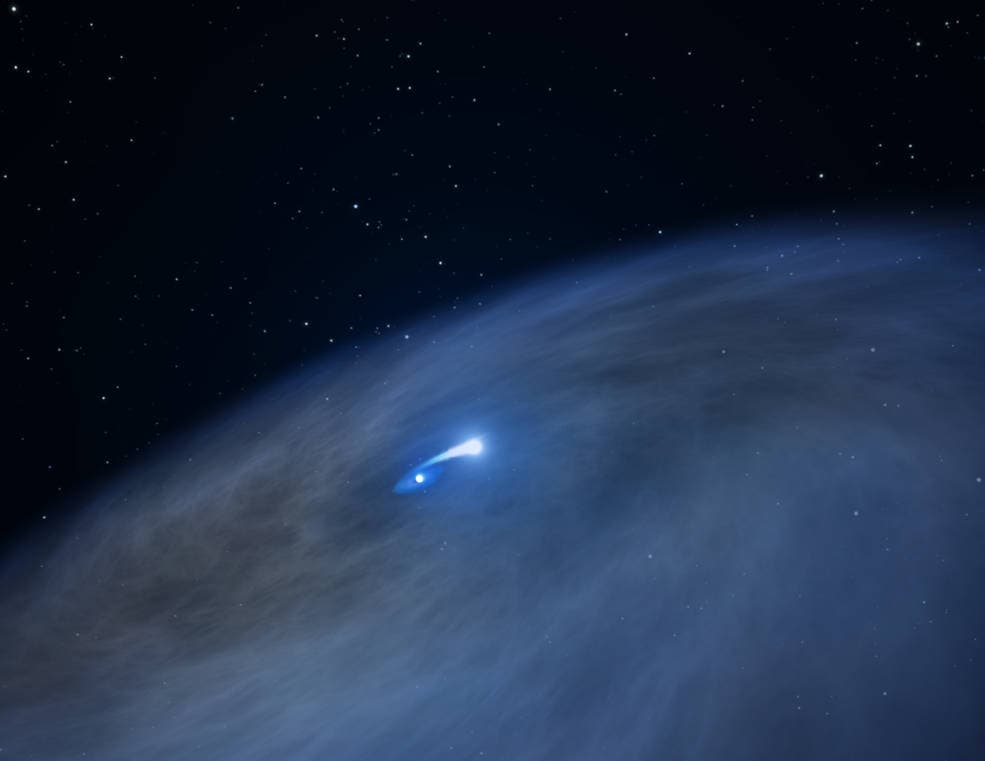 Astronomers using NASA’s Hubble Space Telescope have uncovered surprising new clues about a hefty, rapidly aging star whose behavior has never been seen before in our Milky Way galaxy. In fact, the star is so weird that astronomers have nicknamed it “Nasty 1,” a play on its catalog name of NaSt1. The star may represent a brief transitory stage in the evolution of extremely massive stars.

First discovered several decades ago, Nasty 1 was identified as a Wolf-Rayet star, a rapidly evolving star that is much more massive than our sun. The star loses its hydrogen-filled outer layers quickly, exposing its super-hot and extremely bright helium-burning core.

But Nasty 1 doesn’t look like a typical Wolf-Rayet star. The astronomers using Hubble had expected to see twin lobes of gas flowing from opposite sides of the star, perhaps similar to those emanating from the massive star Eta Carinae, which is a Wolf-Rayet candidate. Instead, Hubble revealed a pancake-shaped disk of gas encircling the star. The vast disk is nearly 2 trillion miles wide, and may have formed from an unseen companion star that snacked on the outer envelope of the newly formed Wolf-Rayet.  Based on current estimates, the nebula surrounding the stars is just a few thousand years old, and as close as 3,000 light-years from Earth.

“We were excited to see this disk-like structure because it may be evidence for a Wolf-Rayet star forming from a binary interaction,” said study leader Jon Mauerhan of the University of California, Berkeley. “There are very few examples in the galaxy of this process in action because this phase is short-lived, perhaps lasting only a hundred thousand years, while the timescale over which a resulting disk is visible could be only ten thousand years or less.”

In the team’s proposed scenario, a massive star evolves very quickly, and as it begins to run out of hydrogen, it swells up. Its outer hydrogen envelope becomes more loosely bound and vulnerable to gravitational stripping, or a type of stellar cannibalism, by a nearby companion star. In that process, the more compact companion star winds up gaining mass, and the original massive star loses its hydrogen envelope, exposing its helium core to become a Wolf-Rayet star.

Another way Wolf-Rayet stars are said to form is when a massive star ejects its own hydrogen envelope in a strong stellar wind streaming with charged particles. The binary interaction model where a companion star is present is gaining traction because astronomers realize that at least 70 percent of massive stars are members of double-star systems. Direct mass loss alone also cannot account for the number of Wolf-Rayet stars relative to other less-evolved massive stars in the galaxy.

“We’re finding that it is hard to form all the Wolf-Rayet stars we observe by the traditional wind mechanism, because mass loss isn’t as strong as we used to think,” said Nathan Smith of the University of Arizona in Tucson, who is a co-author on the new NaSt1 paper. “Mass exchange in binary systems seems to be vital to account for Wolf-Rayet stars and the supernovae they make, and catching binary stars in this short-lived phase will help us understand this process.”

But the mass transfer process in mammoth binary systems isn’t always efficient. Some of the stripped matter can spill out during the gravitational tussle between the stars, creating a disk around the binary.

“That’s what we think is happening in Nasty 1,” Mauerhan said. “We think there is a Wolf-Rayet star buried inside the nebula, and we think the nebula is being created by this mass-transfer process. So this type of sloppy stellar cannibalism actually makes Nasty 1 a rather fitting nickname.”

The star’s catalogue name, NaSt1, is derived from the first two letters of each of the two astronomers who discovered it in 1963, Jason Nassau and Charles Stephenson.

Viewing the Nasty 1 system hasn’t been easy. The system is so heavily cloaked in gas and dust, it blocks even Hubble’s view of the stars. Mauerhan’s team cannot measure the mass of each star, the distance between them, or the amount of material spilling onto the companion star.

Previous observations of Nasty 1 have provided some information on the gas in the disk. The material, for example, is travelling about 22,000 miles per hour in the outer nebula, slower than similar stars. The comparatively slow speed indicates that the star expelled its material through a less violent event than Eta Carinae’s explosive outbursts, where the gas is travelling hundreds of thousands of miles per hour.

Nasty 1 may also be shedding the material sporadically. Past studies in infrared light have shown evidence for a compact pocket of hot dust very close to the central stars. Recent observations by Mauerhan and colleagues at the University of Arizona, using the Magellan telescope at Las Campanas Observatory in Chile, have resolved a larger pocket of cooler dust that may be indirectly scattering the light from the central stars. The presence of warm dust implies that it formed very recently, perhaps in spurts, as chemically enriched material from the two stellar winds collides at different points, mixes, flows away, and cools. Sporadic changes in the wind strength or the rate the companion star strips the main star’s hydrogen envelope might also explain the clumpy structure and gaps seen farther out in the disk.

To measure the hypersonic winds from each star, the astronomers turned to NASA’s Chandra X-ray Observatory. The observations revealed scorching hot plasma, indicating that the winds from both stars are indeed colliding, creating high-energy shocks that glow in X-rays. These results are consistent with what astronomers have observed from other Wolf-Rayet systems.

The chaotic mass-transfer activity will end when the Wolf-Rayet star runs out of material. Eventually, the gas in the disk will dissipate, providing a clear view of the binary system.

“What evolutionary path the star will take is uncertain, but it will definitely not be boring,” said Mauerhan. “Nasty 1 could evolve into another Eta Carinae-type system. To make that transformation, the mass-gaining companion star could experience a giant eruption because of some instability related to the acquiring of matter from the newly formed Wolf-Rayet. Or, the Wolf-Rayet could explode as a supernova. A stellar merger is another potential outcome, depending on the orbital evolution of the system. The future could be full of all kinds of exotic possibilities depending on whether it blows up or how long the mass transfer occurs, and how long it lives after the mass transfer ceases.”

The team’s results will appear May 21 in the online edition of the Monthly Notices of the Royal Astronomical Society.