NASA Thinks Life Can Be Found Beneath Europa's Surface 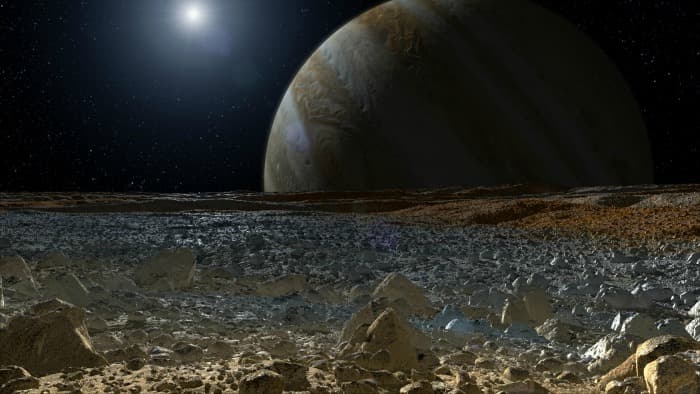 Hidden beneath Europa's icy surface is perhaps the most promising place in our solar system beyond Earth to look for present-day environments that are suitable for life. The Galileo mission found strong evidence that a subsurface ocean of salty water is in contact with a rocky seafloor. The cycling of material between the ocean and ice shell could potentially provide sources of chemical energy that could sustain simple life forms.

And then recently, in February, we received additional information that indicated that the moon is not frozen solid. The Galileo findings were bolstered by the observation of vapor plumes emanating from its surface in a new analysis of Hubble telescope data.

A new video from NASA details why Europa's ocean world is a high priority for future exploration.

Of course, there are some who are skeptical about the possibility of life on this world. However, Kevin Hand, an astrobiologist with NASA’s Jet Propulsion Laboratory (JPL), lays out the overwhelming evidence in the video above. Ultimately, he says there is a “high degree of confidence” that a liquid ocean on Europa exists today and has existed for billions of years. This means like life is rather likely.

“For the first time in the history of humanity we have the tools and technology and capability to potentially answer this question (of the existence of life beyond Earth), and we know where to go to find it...Jupiter’s ocean world, Europa."

NASA may have the backing of congress. As Rep. John Culberson (R-TX), chair of the House Appropriations Subcommittee for Commerce, Justice, and Science, is especially excited about a mission to Jupiter's moon, Europa. In an interview last December with the Houston Chronicle, he said:

I'm certain that there's life elsewhere in the universe. And I'm also certain that the first place we will discover life on another world is Europa. It will be discovered in the oceans of Europa. And it will be a robotic mission designed and flown by NASA that discovers it. About an hour and a half ago I got off the phone with Robert Ballard, who discovered the Titanic. We've become friends through my interest in science. He wanted to be remembered for something other than the discovery of the Titanic. So I introduced him to the Jet Propulsion Laboratory and told him he should get involved in the Europa mission. I think he should help design a penetrator, swimmer, sniffer that would punch through the ice of Europa and find and photograph life in Europa's oceans. I think it's going to be a match made in heaven.

If I'm successful in becoming chairman of the subcommittee that's going to be right when the Europa mission will need its maximum funding. It needs to be a flagship mission. The biggest and best we've ever flown. I really feel blessed. I feel like I'm one of the luckiest people on Earth. I'm blessed with a wonderful family, a great district, representing Houston in the greatest state in the greatest country in the world. I got on this incredible committee where I will be in exactly the right place at the right time to be able to help turn NASA around, to not only preserve America's leadership role in space, but I also hope to be a key part in discovering life on another world for the first time. We're only going to have one chance at this in our lifetimes. We've got one shot. I want to make sure you and I are here to see those first tube worms and lobsters on Europa.