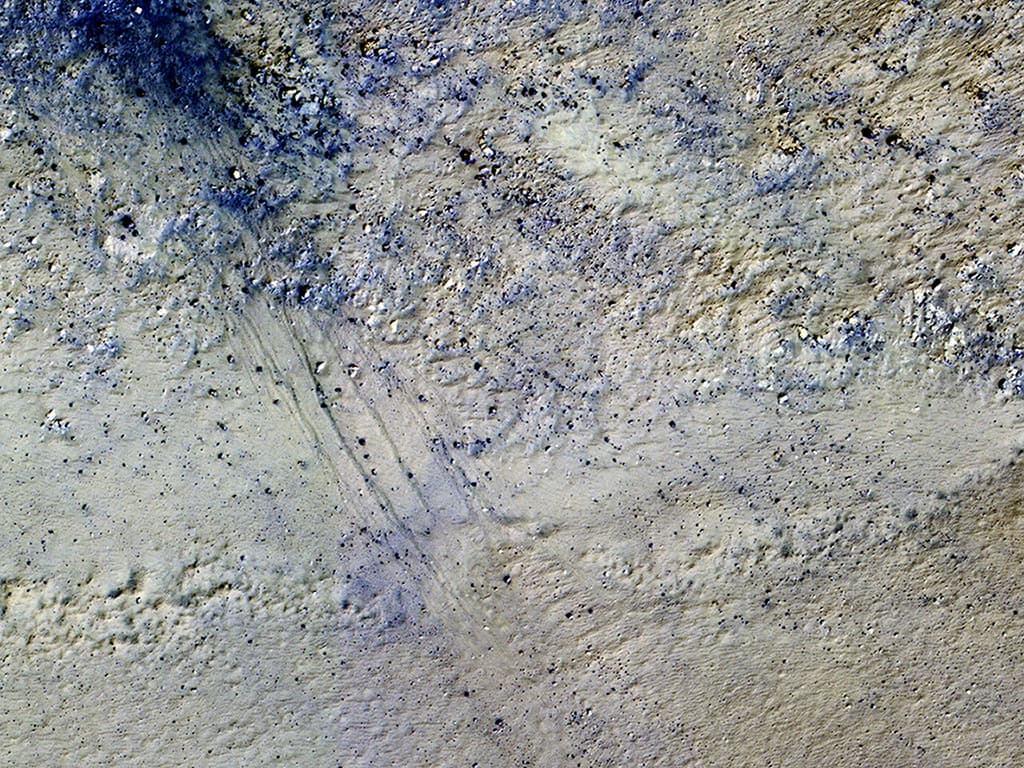 Ever since the Mars Reconnaissance Orbiter (MRO) went into orbit, its HiRISE camera has returned invaluable scientific data from the Red Planet. Most recently, it beamed back what may be evidence of geologic activity inside a large-scale impact crater on Mars' surface.

The image above shows the central peak of this crater, named Porter—after the U.S. astronomer and explorer, Russell W. Porter. On the south and east facing slopes of the central peak, shallow gullies are visible. Scientists believe that these features could have been carved by volatiles—like carbon dioxide frost—in the recent geologic past.

On the northern slopes are several smaller slope features that could be the remnants of past active gullies or recurring slope lineae (RSL). RSL are narrow (0.5 to 5 meters), dark markings on steep slopes that appear and incrementally lengthen during warm seasons, but fade in cold seasons. These features are more common on equator-facing slopes, when and where the peak surface temperatures are higher.

The observations of RSL are based on irregular flow of briny water, therefore activity may not depend solely on temperature.

According to the team of researchers headed by the University of Arizona, the observations suggest liquid water may be abundant on Mars in some near-surface equatorial regions. However the exact source of the water and the mechanism behind its movements are not completely understood.

So, have we just accidentally found liquid water flowing on Mars, by looking at geologic features? It's unclear.

Liquid water indeed may once have once flowed on the Red Planet, but we don’t have strong evidence that it still flows today, just hints. More images would be needed to confirm these assertions.

Either way, these dunes, which are featured in the image below, are pretty mean-looking. They show sharp crests with prominent ripples—both signs of actively migrating dunes.

There are also dust devil tracks, and clear evidence that they continue to be modified by swirling winds, which persistently remove surface dust.

Sand dunes are among the most widespread features on present-day Mars, serving as unique indicators of interactions between the atmosphere and surface.