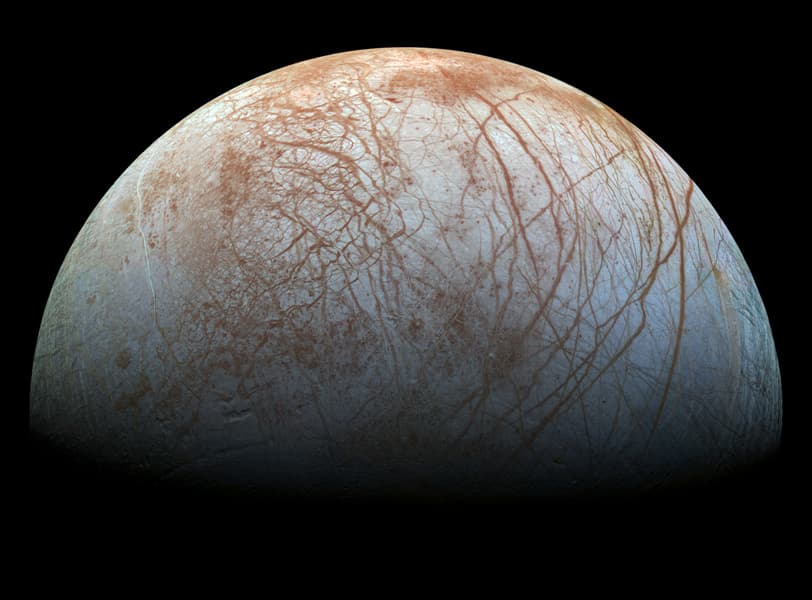 Scientists have produced a new version of what is perhaps NASA's best view of Jupiter's ice-covered moon, Europa. The mosaic of color images was obtained in the late 1990s by NASA's Galileo spacecraft. This is the first time that NASA is publishing a version of the scene produced using modern image processing techniques.

This view of Europa stands out as the color view that shows the largest portion of the moon's surface at the highest resolution. The puzzling, fascinating surface of Jupiter's icy moon Europa looms large in this newly-reprocessed color view, made from images taken by NASA's Galileo spacecraft in the late 1990s.

The view was previously released as a mosaic with lower resolution and strongly enhanced color (see PIA02590). To create this new version, the images were assembled into a realistic color view of the surface that approximates how Europa would appear to the human eye. The image scale is 1 miles (1.6 kilometers) per pixel.

The scene shows the stunning diversity of Europa's surface geology. Long, linear cracks and ridges crisscross the surface, interrupted by regions of disrupted terrain where the surface ice crust has been broken up and re-frozen into new patterns.

An earlier, lower-resolution version of the view, published in 2001, featured colors that had been strongly enhanced. The new image more closely approximates what the human eye would see. Space imaging enthusiasts have produced their own versions of the view using the publicly available data, but NASA has not previously issued its own rendition using near-natural color.

The image features many long, curving and linear fractures in the moon's bright ice shell. Scientists are eager to learn if the reddish-brown fractures, and other markings spattered across the surface, contain clues about the geological history of Europa and the chemistry of the global ocean that is thought to exist beneath the ice.