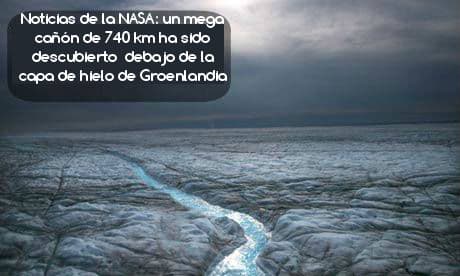 Many think that we have learned all that there is to know about Earth’s geography—from lakes and rivers to hydrothermal vents, from amazing redwood forests to icy mountain caps—sometimes it seems that there is little left to explore. In truth, there are many things that we have yet to learn about the Earth. Even today, with all of our technology and scientific data, much remains hidden deep within the ocean’s depths, in the crevices of Arctic mountains, and other far-flung places where humans have yet to tread.

Yet, each decade (indeed, each day) brings us one step closer to a comprehensive understanding of our home planet. Case in point, recently, NASA uncovered one of Earth’s amazing (and simply massive) hidden mysteries. On August 29th, NASA announced the discovery of a 460 mile long mega canyon (740km) beneath Greenland’s ice sheet.

These measurements make this new canyon longer than the Grand Canyon (about twice as long). In some places, it is as deep as 2,600 feet (800 meters), which is also on scale with segments of the Grand Canyon. To uncover this immense feature, scientists used thousands of miles of airborne radar data, which was collected through the collaborative effort of NASA, the United Kingdom, and Germany over several decades.

And this feature isn’t just impressive because of its size. It serves an important function…one that is intricately connected to its very existence. Ultimately, researchers believe that the canyon plays an important role in transporting sub-glacial meltwater from the interior of Greenland to the edge of the ice sheet into the ocean. Evidence suggests that before the presence of the ice sheet, as much as 4 million years ago, water flowed in the canyon from the interior to the coast and was a major river system.

It is rather amazing to think about—there are massive rivers and canyons…an entire geography that exists undiscovered beneath your feet.