Lifting the Veil on Dark Galaxies 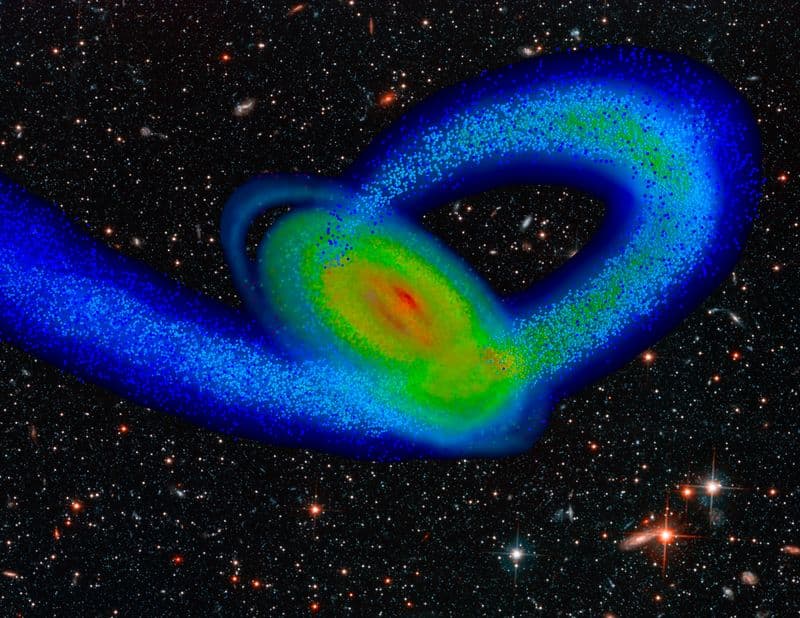 A cluster of young, pulsating stars discovered in the distant regions of the Milky Way may mark the location of a previously unseen dark-matter dominated dwarf galaxy hidden behind clouds of dust, on the far side of our galaxy.

A team, led by Sukanya Chakrabarti from Rochester Institute of Technology, analyzed near-infrared data collected by the European Southern Observatory’s survey VISTA to find four young stars approximately 300,000 light-years away. These young stars are Cepheid variables -- ”standard candles” that astronomers use to measure distances. According to Chakrabarti, these are the most distant Cepheid variables found close to the plane of the Milky Way. The team’s discovery was announced in a paper accepted for publication at Astrophysical Journal Letters on Feb. 5.

The stars appear to be associated with a dwarf galaxy Chakrabarti predicted in 2009 based on her analysis of ripples in the Milky Way’s outer disk. Chakrabarti’s earlier study predicted the mass and location of the dark-matter dominated dwarf galaxy.

Radiation emitted by the Cepheid variable stars allowed her to derive accurate distances and test her prediction. Chakrabarti analyzed VISTA’s database of tens of millions of stars to find these clustered Cepheid variables in the Norma constellation, all within one degree of each other.

“These young stars are likely the signature of this predicted galaxy,” said Chakrabarti, assistant professor in RIT’s School of Physics and Astronomy. “They can’t be part of our galaxy because the disk of the Milky Way terminates at 48,000 light-years.”

Invisible particles known as dark matter make up 23 percent of the mass of the universe. The mysterious matter represents a fundamental problem in astronomy because we don’t understand what it is, Chakrabarti said.

“The discovery of the Cepheid variables shows that our method of finding the location of dark-matter dominated dwarf galaxies works,” she said. “It may help us ultimately understand what dark matter is made up of. It also shows that Newton’s theory of gravity can be used out to the farthest reaches of a galaxy.”

VISTA’s infrared eyes allow scientists to study unexplored regions close to the galactic plane that are inaccessible to optical surveys. Optical wavelengths cannot penetrate the dust and gas in these regions. This next-generation sky survey helps scientists look at the structure of the galaxy and distant stars at low latitudes. Infrared surveys may help resolve current discrepancies between observations and the current cosmological paradigm by giving us a more complete view of the structure of the Milky Way, Chakrabarti said.

“I decided to see if I could actually find the thing,” Chakrabarti said. “It was a difficult prediction to test because it was close to the plane, and therefore difficult to see in the optical. This new survey, VISTA, was able to help us to lift the veil and see these young pulsating stars.”

(From Rochester's Institute of Technology)