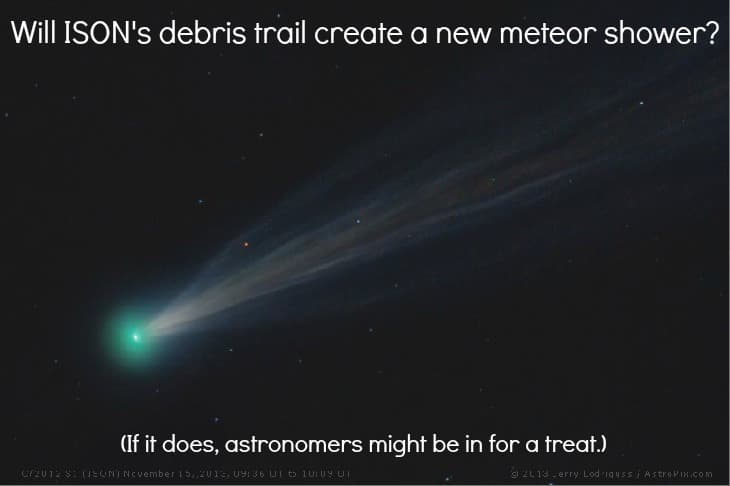 You all remember Comet ISON, right? The little comet that couldn't? In late November, ISON disappointed skywatchers all over the world by not surviving its trip around the Sun. There was no "comet of the century" to be seen in December, as ISON was little more than a diffuse collection of dust. Since, ISON has somehow managed to continuously surprise astronomers with its peculiar behavior. The dust trail left behind by ISON might be the subject of additional interest.

Around January 12th, Earth will be passing through the debris trail left behind by ISON, paving the way for another annual meteor shower. Only, this meteor shower is likely to have some very interesting properties.

The dust left behind by ISON is very fine according to computer models created by Paul Wiegert of the University of Western Ontario. Between the dust's miro-size (seriously, these particles are probably a few microns across) and their relatively slow speed (they'll be traveling around 56 km/s when they impact Earth), then they'll get "caught" by Earth's upper atmosphere and slowly drift down instead of burning up in a big ball of fire like a proper meteor.

Unfortunately, this gentle "rain" won't really be noticeable to amateur astronomers. I mean, how do you watch trillions of dust particles slowly fall from the sky? Well, it's possible that ISON's comet dust might cause some noctilucent clouds.

A noctilucent cloud is a phenomena that has a tenuous appearance. It is created when tiny ice crystals glow in the upper atmosphere (in this case, we are talking the mesosphere, which is around 80 km) - these are the highest clouds that can form. They are called "noctilucent" because they are only visible at night after the sun has dipped below the horizon ("noctilucent" is Latin for "night shining"). Data recently collected by NASA's Aeronomy of Ice in the Mesosphere (AIM) spacecraft suggests that the vast majority of noctilucent clouds are formed from dust originating in space.

Whereas, it would be a cool light show, there is a lot of debate among scientists if ISON's dust will actually be able to seed this phenomenon. In any event, the dust is so small that it doesn't pose a danger to our satellites or the ISS. Even then, NASA officials are on the lookout for possible anomalies over the next few days. Because ISON has been the comet of many surprises, sky watchers should also be on the look out - perhaps ISON will have one more trick up its sleeve that'll be interesting to watch.