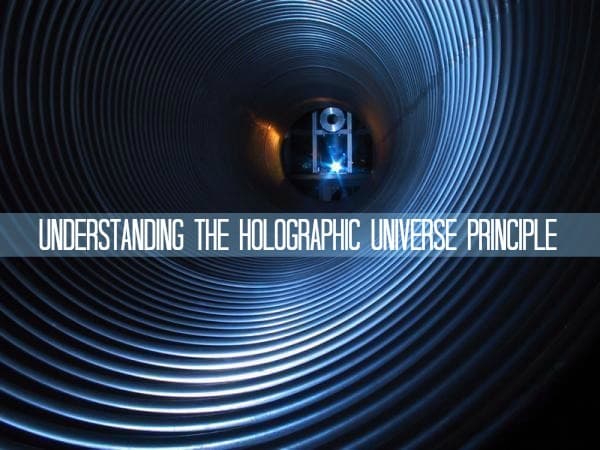 Black-holes are difficult to understand because their primary characteristic —  that they destroy the matter they consume — contradicts a law of physics that says the opposite is true. If the gravitational pull of a black-hole is so powerful that even light cannot escape, then how is it possible that mass is not destroyed? Where does it go? One current theory tries to explain this using the concept of "information".

How It Factors In:

As matter is pulled into the black hole, the information that makes up its volume is encoded on the surface of the black hole. Think of this like a vegetable juicer. As vegetables enter the juicer as whole pieces of biologic information, they are pulped into liquid form. From this point on, it would be impossible to ever recreate the solid vegetable from the juice.

The holographic universe principle suggests that the code within the volume of the solid carrot would me microscopically encoded onto the lid of the juicer as a set of 1s and 0s. In a black hole, information is spread onto the surface so thinly that it gives the impression that mass has actually been destroyed.

Essentially, the mass is converted into information which is then represented on the surface area of the black hole. Now think about this. All the mass that goes into a black hole is 3D. Yet, all the information is on a surface AREA (2D).

So, What Does This Mean?

It shows that to describe mass, we only need information about its 2D structure. 3D information isn't needed at all. Think of it this way. If you look at a credit card, some of them have "3D holograms" (the "scratchy" surfaces that give a 3D illusion). It's essentially a 2D surface area that looks 3D because of the way the light bounces off of it.

Now let's apply this to our own lives. The holographic theory states that our own lives might just be a 3D "hologram" that's being reflected off of a 2 dimensional surface. Here's an analogy. The universe is a credit card that contains information (about everything) on its surface. We are essentially the projected 3D hologram. The surface that we are reflected from is the cosmological horizon (the farthest point we can theoretically "see") - 13.75 billion light-years away (the farthest possible distance anything can be, given the age of the universe).

How can we say this? Well we can see from black holes that 3D information isn't necessary to describe an object. Thus, it's not a fundamental property.

Is There Any Proof?

Obviously, we've never found any evidence that solidly supports the holographic universe principle, but researchers have discovered several things that indicate they're on the right track.

Namely, astronomers discovered a weird, high frequency noise coming from GEO600: an Earth-based gravitational wave detector. The team leader — Craig Hogan, a physicist at Fermilab Center for Particle Astrophysics — believes that this find could be attributed to some type of a holographic noise, but that remains highly controversial at the current moment.

TL;DR: You are a being that is actually 13.75 billion light-years away from where you think you are. Plus, the entire 3D world is just an illusion - everything exists on a 2D surface.

Enjoy this? Learn about David Bohm, along with his role in the holographic universe principle, here.  Or, learn about the a theory that says we might be living in a computer simulation here.