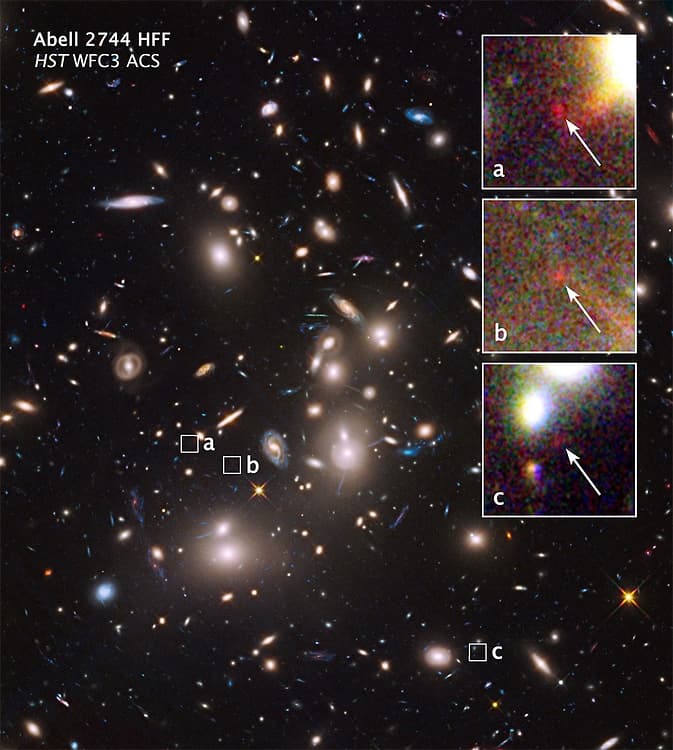 Peering through a giant cosmic magnifying glass, NASA's Hubble Space Telescope has spotted one of the farthest, faintest, and smallest galaxies ever seen. The diminutive object is estimated to be over 13 billion light-years away. This new detection is considered one of the most reliable distance measurements of a galaxy that existed in the early universe, said the Hubble researchers. They used two independent methods to estimate its distance.

The galaxy appears as a tiny blob that is only a small fraction of the size of our Milky Way galaxy. But it offers a peek back into a time when the universe was only about 500 million years old, roughly 3 percent of its current age of 13.7 billion years. Astronomers have uncovered about 10 other galaxy candidates at this early era. But this newly found galaxy is significantly smaller and fainter than most of those other remote objects detected to date.

"This object is a unique example of what is suspected to be an abundant, underlying population of extremely small and faint galaxies at about 500 million years after the big bang," explained study leader Adi Zitrin of the California Institute of Technology in Pasadena. "The discovery is telling us that galaxies as faint as this one exist, and we should continue looking for them and even fainter objects so that we can understand how galaxies and the universe have evolved over time."

The galaxy was detected as part of the Frontier Fields program, an ambitious three-year effort, begun in 2013, that teams Hubble with NASA's other Great Observatories — the Spitzer Space Telescope and the Chandra X-ray Observatory — to probe the early universe by studying large galaxy clusters. These clusters are so massive that their gravity deflects light passing through them, magnifying, brightening, and distorting background objects in a phenomenon called gravitational lensing. These powerful lenses allow astronomers to find many dim, distant structures that otherwise might be too faint to see.

In this new discovery, the lensing power of the mammoth galaxy cluster Abell 2744, nicknamed Pandora's Cluster, produced three magnified images of the same galaxy. Each magnified image makes the galaxy appear as much as 10 times larger and brighter than it would look without the intervening lens.

An analysis of the distant galaxy shows that it measures merely 850 light-years across, 500 times smaller than the Milky Way, and is estimated to have a mass of only 40 million suns. The galaxy's star formation rate is about one star every three years (one-third the star formation rate in the Milky Way). Although this may seem low, Zitrin said that given its small size and low mass, the tiny galaxy is in fact rapidly evolving and efficiently forming stars.

"Galaxies such as this one are probably small clumps of matter that are starting to form stars and shine light, but they don't have a defined structure yet," Zitrin said. "Therefore, it's possible that we only see one bright clump magnified due to the lensing, and this is one possibility as to why it is smaller than typical field galaxies of that time."

Zitrin's team spotted the galaxy's gravitationally multiplied images using near-infrared and visible-light photos of the galaxy cluster taken by Hubble's Wide Field Camera 3 and Advanced Camera for Surveys. But at first they didn't know how far away it was from Earth. Normally, astronomers use spectroscopy to determine an object's distance. The farther away a galaxy, the more its light has been stretched by the universe's expansion. Astronomers can precisely measure this effect through spectroscopy, which characterizes an object's light.

But the gravitationally lensed galaxy and other objects found at this early epoch are too far away and too dim for astronomers to use spectroscopy. Astronomers instead analyze an object's color to estimate its distance. The universe's expansion reddens an object's color in predictable ways, which scientists can measure.

Members of Zitrin's team not only performed the color-analysis technique, but they also took advantage of the multiple images produced by the gravitational lens to independently confirm their distance estimate. The astronomers measured the angular separation between the three magnified images of the galaxy in the Hubble photos. The greater the angular separation due to lensing, the farther away the object is from Earth. To test this concept, the astronomers compared the three magnified images with the locations of several other multiply imaged objects lensed by Abell 2744 that are not as far behind the cluster. The angular distance between the magnified images of the closer galaxies was smaller.

WATCH: "Artist's Impression of Gravitational Lensing of a Distant Merger"

"These measurements imply that, given the large angular separation between the three images of our background galaxy, the object must lie very far away," Zitrin explained. "It also matches the distance estimate we calculated, based on the color-analysis technique. So we are about 95 percent confident that this object is at a remote distance, at redshift 10 (a measure of the stretching of space since the big bang). The lensing takes away any doubt that this might be a heavily reddened, nearby object masquerading as a far more distant object."

Astronomers have long debated whether such early galaxies could have provided enough radiation to warm the hydrogen that cooled soon after the big bang. This process, called "reionization," is thought to have occurred 200 million to 1 billion years after the birth of the universe. Reionization made the universe transparent to light, allowing astronomers to look far back into time without running into a "fog" of cold hydrogen.

"We tend to assume that galaxies ionized the universe with their ultraviolet light," Zitrin said. "But we do not see enough galaxies or light that could do that. So we need to look at fainter and fainter galaxies, and the Frontier Fields and galaxy cluster lensing can help us achieve this goal."

The team's results appeared in the Sept. 5 online edition of The Astrophysical Journal Letters.

This article is a press release from NASA. See the original here.