This Neptune-Sized Exoplanet Is Being Melted Away By Its Star

At its current rate, half the planet will disappear into space. 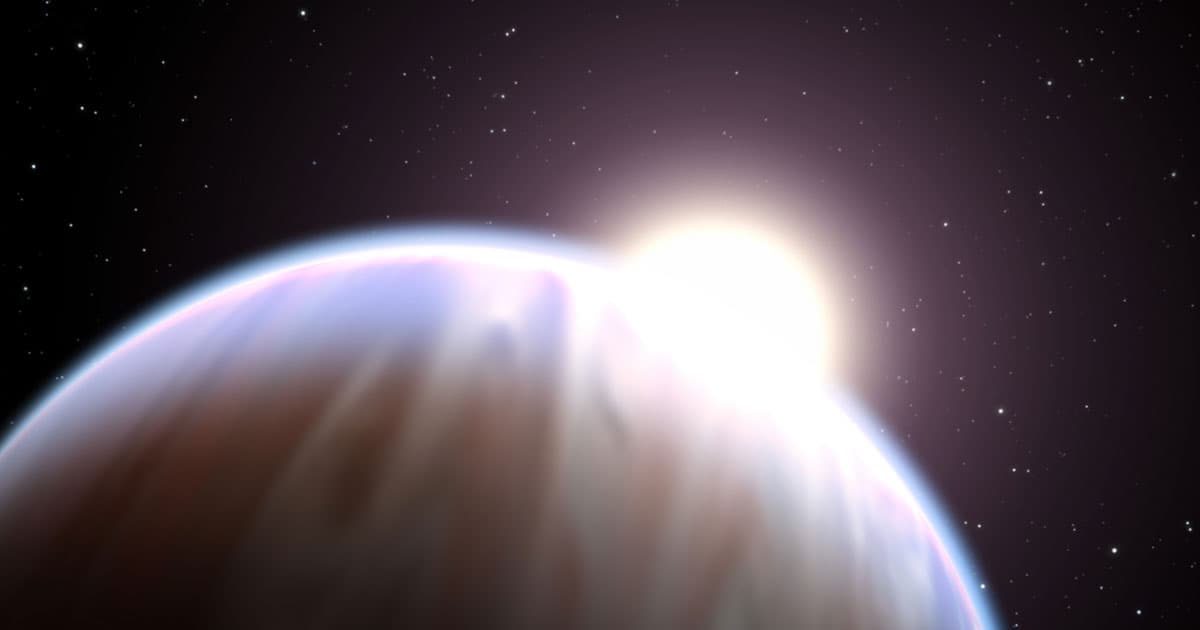 A newly discovered gas planet, orbiting a distant star, is approximately the size of Neptune — but it's so close to the red dwarf it orbits that it's literally boiling away.

"This is the smoking gun that planets can lose a significant fraction of their entire mass," Johns Hopkins planetary scientist David Sing, who helped find the exoplanet, said in a news release. He added that it's "losing more of its mass than any other planet we seen so far; in only a few billion years from now, half of the planet may be gone."

The planet, which is called GJ 3470b and described in a new paper in the journal Astronomy & Astrophysics, is what's known as a "hot Neptune." That means that it's a gas giant, like our own solar system's Neptune or Jupiter, but it's far closer to its host star than either of those planets.

GJ 3470b is so close to its star, in fact, that it's boiling away into space. To make matters worse, it's not a very heavy planet, meaning that its gravitational pull on its own atmosphere is comparatively weak.

Mysteries of the Cosmos

The rapidly vanishing GJ 3470b could provide an important clue about the nature of gas planets outside our solar system. Though the Kepler mission has found many smaller "mini-Neptunes" sprinkled throughout the galaxy, hot Neptunes are rare. The new theory: we're not finding as many hot Neptunes because, like GJ 3470b, they tend to boil away into mini-Neptunes.

"It's one of the most extreme examples of a planet undergoing a major mass-loss over its lifetime," University of Geneva astronomer Vincent Bourrier, another researcher on the hot Neptune project, said in the same news release. "This sizable mass loss has major consequences for its evolution, and it impacts our understanding of the origin and fate of the population of exoplanets close to their stars."

Read This Next
Against All Odds
If the Readings Are Right, There's Something Very Strange About This Exoplanet
Snap
Scientists Just Took an Actual Picture of a Planet in Another Star System
A Bit On the Nose
An Earth-Sized Planet Is Floating Around Without a Star
Howdy Alien Neighbor
New Research: Closest Exoplanet to Earth Could Host Life
A New Home?
Astronomers Discover "Intriguing," Extremely Earth-Like Exoplanet
More on Hard Science
Total Drama Island
Yesterday on the byte
Journal Retracts Study on Room Temperature Superconductors
Tell Us How You R...
Tuesday on the byte
Former Particle Physicist Absolutely Annihilates the Field of Particle Physics
Long Live
Sep 25 on futurism
Giving Baby Mice This Drug Makes Them Live 10 Percent Longer
READ MORE STORIES ABOUT / Hard Science
Keep up.
Subscribe to our daily newsletter to keep in touch with the subjects shaping our future.
+Social+Newsletter
TopicsAbout UsContact Us
Copyright ©, Camden Media Inc All Rights Reserved. See our User Agreement, Privacy Policy and Data Use Policy. The material on this site may not be reproduced, distributed, transmitted, cached or otherwise used, except with prior written permission of Futurism. Articles may contain affiliate links which enable us to share in the revenue of any purchases made.
Fonts by Typekit and Monotype.