The “Smith Cloud” is a  gigantic cloud of gas that is currently speeding toward our galaxy at the speed of one million km/h (700,000 mph). It consists mostly of sulfur, and it is some11,000 light-years long and 2,500 light years wide.

What’s more, it is estimated to have as much mass as a few million suns.

This cloud was estimated to have been spat out of our own Milky Way around 70 million years ago. The cloud was named after Gail P. Smith ,who first detected it at the Dwingeloo Radio Observatory in the Netherlands way back in 1963.

It’s since been repeatedly observed in radio wavelengths with the NRAO’s Green Bank Observatory in West Virginia and recently with the Hubble Space Telescope. Ultimately, it is thanks to Hubble’s analyses that we known the cloud contains heavy elements, like sulfur, contrary to some earlier analyses. This, along with its arcing trajectory, strongly indicates an origin from the star-enriched region along the outermost edges of our galaxy.

“The cloud is an example of how the galaxy is changing with time,” said Andrew Fox of the Space Telescope Science Institute in Baltimore and leader of the research team. “It’s telling us that the Milky Way is a bubbling, very active place where gas can be thrown out of one part of the disk and then return back down into another.”

The findings were published in the Janurary 2016 issue of The Astrophysical Journal Letters.

Cloud moves around the edge of our galaxy 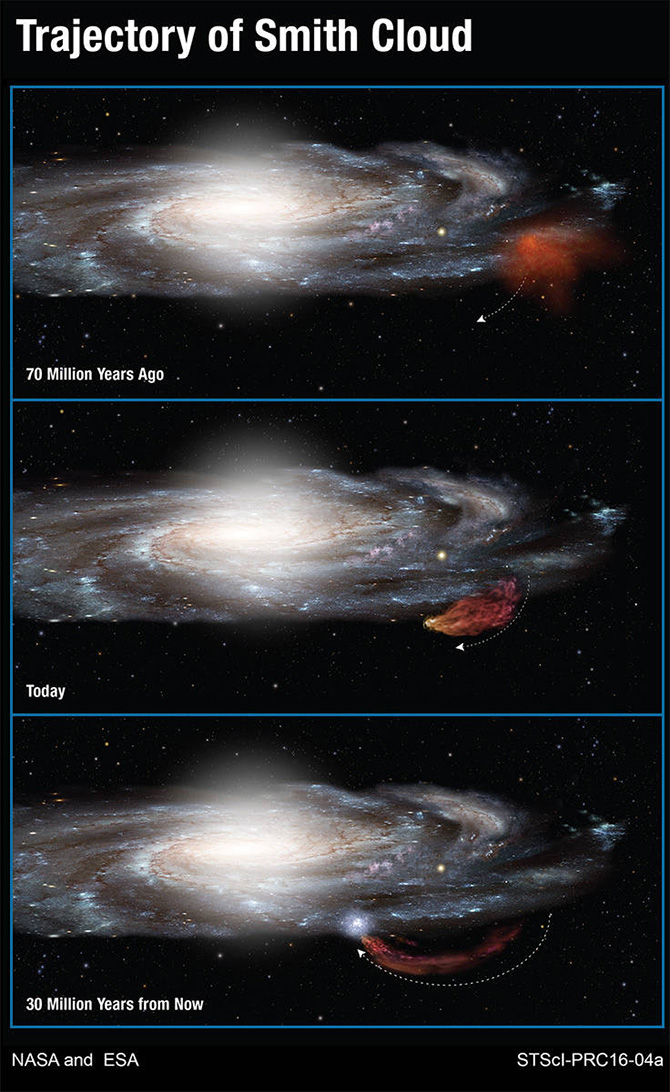 The Smith Cloud is comet-shaped and has no stars, so it is not visible in optical wavelengths. If it was visible though, it would span an area as large as the Orion constellation.

When the high-velocity cloud impacts the disc of our galaxy scientists assert that the collision will ignite an explosion of star formation around the impact site and most likely cause enough matter and energy to create a two-million new solar-mass stars.

“Our galaxy is recycling its gas through clouds, the Smith Cloud being one example, and will form stars in different places than before,” said Fox. ”Hubble’s measurements of the Smith Cloud are helping us to visualize how active the disks of galaxies are.”

What actually caused the ejection of the cloud is not yet known. One intriguing suggestion is that it’s a region of dark matter that collided with the Milky Way and somehow captured a clump of gas as it went.

“There are theoretical calculations suggesting that a dark matter satellite could capture gas as is passes through the Milky Way disk and that may be the amazing circumstance we are witnessing,” said research co-author and long-time Smith Cloud fan Jay Lockman, an astronomer with the National Radio Astronomy Observatory (NRAO).