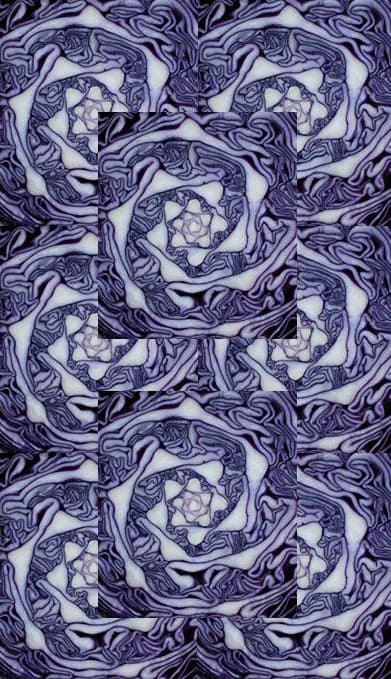 Fractals are often astoundingly beautiful. And although you may not be aware, they quite literally surround us. We can see them in many places in nature. Like, for example, in this image. Well, maybe what you are seeing isn’t a perfect fractal, but it is a good demonstration of what a fractal is. And although what you are seeing may look like a rare and precious piece of art, it is actually rather common and not terribly valuable.

Any guesses as to what it is?

What you see here is a (rather beautiful) cabbage. I suppose that one could say that I cheated a bit, as I created a layered pattern in order to skew our perception of the image. But the result of this little fib, I think, is really rather pretty. Such is the nature of fractals (or things that are nearly fractals).

In mathematical terms, fractals are geometric figures that typically display self-similar patterns. The term “self-similarity” can be most readily understood by thinking of a camera that zooms in on an image. Typically, when you zoom in on a photograph, you see finer points, different details, and new structures. Not so with fractals. When you zoom in on a true fractal, no new detail appears. Nothing changes. Rather, the same pattern repeats over and over. In the case of the single cabbage image, nearly the same pattern reappears over and over.

Another interesting aspect of true fractals is how they can be divided. To help us flesh this out, let’s think of a line. When you cut a line into segments, you end up with smaller pieces of the line (obviously). These smaller segments are still just one dimensional lines. But what happens when you do the same thing with a fractal? Like the line, the triangle depicted in the gif. below is one dimensional; however, it has a fractal dimension that is ultimately greater than 1 because of how its detail can be measured.

This brings us to our next point about fractals. If it is a true fractal,  then it cannot be measured in traditional ways. Yes, you read that right--you can't measure it.  Look at the gif. and imagine trying to measure a small segment on the side to determine how long it is. In measuring a wavy fractal curve such as this one, you would never find a small enough straight segment to conform to the curve, because the wavy pattern would always re-appear in smaller and smaller and smaller sizes.

Freeman Dyson eloquently explained the birth of fractals in "Characterizing Irregularity."  He states that, "a great revolution of ideas separates the classical mathematics of the 19th century from the modern mathematics of the 20th....Historically, the revolution was forced by the discovery of mathematical structures that did not fit the patterns of Euclid and Newton. These new structures were regarded as 'pathological,' as a 'gallery of monsters,' akin to the cubist paintings and atonal music that were upsetting established standards of taste in the arts at about the same time. The mathematicians who created the monsters regarded them as important in showing that the world of pure mathematics contains a richness of possibilities going far beyond the simple structures that they saw in Nature."

Consequently, fractals are really formed by infinitely many steps. But of course, during our everyday experiences, we don't often deal in infinite. As such, in nature (like what is demonstrated through the cabbage example), we can find many approximate fractals that display self-similarity over extended and beautiful scale ranges; however, these scale ranges are finite. Ultimately, this means that all of the beautiful geometric fractals that people draw aren't really fractals. Or maybe I should say that they aren't "fractals" according to the definition that mathematicians use when they employ this term.